“If you are falsely charged, these are the guys to have on your side.”

The officer in the van called for backup, making false statements. Officer’s responded, arrested, and locked up David. David, who is also a film maker, just happened to be filming the entire incident from across the street. The police confiscated his cameras. They still charged him with Disorderly Conduct. David needed a good disorderly conduct defense.

The US~Observer helped investigate, and published an article. David’s attorney helped, too. Being caught red-handed, combined with public pressure was all it took after video footage clearly refuted the officer’s lies. David’s false charges were dismissed.

If you or anyone you know have been falsely arrested, or falsely charged with disorderly conduct, contact the US~Observer. We can help. 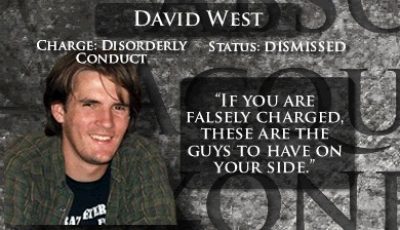