IS THE POLITICAL FIX IN?

It doesn’t matter what they, his buddies, want; or who has been disadvantaged, or whose citizen rights have been lost, all that matters is: will his buddies get the decision they want when they want it. 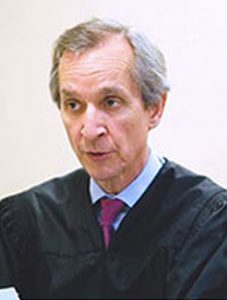 Judge John Stegner has a long history of spinning his decisions in favor of those who favor him.  In a recent case in Idaho County, Idaho, where Judge Stegner was assigned to decide property boundary issues, the citizen seeking a true and objective judgment from Stegner found that Stegner only wanted to feather his own nest, by throwing the case in favor of the other side; refusing to listen to hard evidence and twisting words to make it appear he was neutral, when he wasn’t.

In this example case, the other side has been represented by attorneys who are a part of the Lewiston legal clique. These attorneys reportedly get what they want for their clients by ‘jerry-rigging’ the judge, when they did such things as arrange for him to receive a Distinguished Jurist Award, recognizing him for fairness in the judiciary. But, it was a farce because his history reveals he is “fair” to his buddies, but knows how to manipulate the legal process to rake those outside the clique over the legal coals. We shall call them “outsiders.”

In the case mentioned above, the landowner being judicially raked was absolutely right. But, it was necessary for the legal clique to villainize her to justify the adverse decisions. If only the truth had been publicized then, those who bestowed this honorable award never would have selected John Stegner as its recipient, given his contemptuous attitude toward Judicial ethics and his mistreatment of at least one citizen landowner over the last few years as various surveyors tried to relocate her boundaries in favor of neighbors who paid to have their boundaries redefined by taking land from this citizen.

Owning property is hazardous enough, but dealing with thieving surveyors, who deliberately misallocate monuments in order to adjust property boundaries to favor their clients, destroys the very fabric of the American Dream; the dream of property ownership. What Stegner did, was to side with the neighbors by declaring his intention to accept only the expert opinion of one of these “thieving” surveyors, without applying objective analysis: Judge Stegner actually stated: I will believe whatever the opposing surveyor says “is right, is right.” For any judge to accept only the opinion of his buddies as correct more than a year prior to trial, without testing that opinion in the crucible of cross examination at a contested hearing, is one of the hallmarks of bias and prejudice.

In fact, more than a year before the case was scheduled for trial, Judge Stegner made up his mind, revealing the extent of his bias. Fortunately, it was early enough to remove him from the case.  In fact, given the Judge’s choice of either admitting that he was biased (strictly based on Stegner’s own words) or to bow out of the case, he chose to “voluntarily” remove himself from the litigation.  Interestingly, it was Stegner who showed that he was prejudiced against this land-owning citizen, who only asked that her boundaries be established according to the original US Government homestead survey in 1873, over 140 years ago, preserving the property as it was when she and her family purchased it 50 years ago and keeping the same boundaries established by property owners back to the time of the original settlement.

Those boundary lines were well established by the government and are consistent with the original lines of occupation, cultivation and residency. Now, thanks to these “thieving surveyors”, the lines have been jumbled, confused and relocated, in an effort to satisfy neighbors with a lust for land.

There were lengthy legal briefs filed showing that the court’s own record has statements made by Judge Stegner in which he, repeatedly disclosed his bias and prejudice, yet, for some inexplicable reason, he made it to the Idaho Governor’s short list of candidates for final selection as the next Supreme Court Justice.

If Judge Stegner should be appointed to the highest court in Idaho, his title should not be “Justice,” rather; it should be “Just Us,” referring to him and his buddies.  This position should belong to a humbler servant of the public.  Surely the Governor of Idaho has better judgment than to appoint one that favors his friends and manufactures “injustice” for the rest of the citizenry who don’t.

Vaccinated: The Side Effects of Blindly Following

Yes, You Have the Right to Talk Back to the Government, But It Could Get You Killed