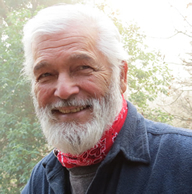 Selma, OR – Ken Legaux and Arthur (Art) Olsen became neighbors around 2011. Art had relocated to Selma from California, purchasing land that adjoined Ken’s property. Art’s new home had an easement that was shared by both Ken and Art. After Art purchased his land, another 70 acre property was purchased which shared the same easement. According to one Selma property owner, Art wanted the 70 acres and was upset when he didn’t get it. Others also stated that Art did not want more people to use the easement if he could prevent it. That’s when the problems began. The once “friendly” neighbor Art, sued Ken “multiple times” over a property line dispute. Horrific claims against Ken’s character ensued. The legal battles lasted years. As time passed, tens of thousands of dollars in attorney’s fees were reportedly spent, without sufficient resolution.

Ken Legaux built his home eleven years ago. Prior to buying that land, Ken lived not far off the same dirt road for over 30 years. Listening to him speak, one realizes that Ken has deep Cajun roots, something he is proud of. Ken has been a sheriff’s deputy and city police officer.. He has worked as an electrician most of his adult life. He has a reputation for being a “top notch” guy who would literally give a friend the shirt off his back. Ken is also known in the community for his ability to tell stories. He’s always the life of the party according to some of his close friends. Family is important to him. He helped raise eight children and has been married for thirty-one years.

Art Olsen is reportedly a wealthy man who sold property in California and moved to Oregon for retirement. Several people in the small community think highly of Art. He’s also known as friendly by some, and, a “liar” by others. One thing is certain, Art lied to a national newspaper by providing extremely harmful and false information about another person without knowing the truth. That person is Ken Legaux.

Once Art became Ken’s neighbor, they “began hanging out,” according to Ken. It wasn’t long before they were enjoying a few beers together like buddies often do. Ken would help grade (smooth out) Art’s part of the driveway with his own heavy equipment. He also helped make roof repairs to Art’s home. He did electrical work for Art. Ken also supplied Art with two cords of fire wood; not the usual actions of a bad neighbor. He not only helped Art, he reportedly did it all for free. In fact, as Ken and several others tell it, they got along quite well in the beginning.

Things worsened after the new neighbor arrived. Art’s dislike of the new neighbor is reportedly what severed his relationship with Ken. “The dispute between those two neighbors was not good,” Ken stated. He continued, “I tried to keep the peace” for as long as possible. Simply put, witnesses said Art didn’t want more people driving down the legal easement – their shared driveway. An easement is defined as “a nonpossessory property interest that allows the holder of the easement to use property that he or she does not own or possess.” Still, Art was, “fuming mad” over the shared driveway according to Ken. 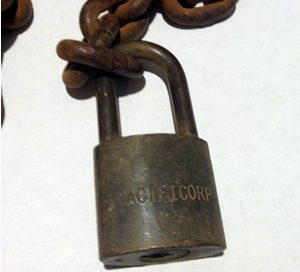 The gate which is located at the beginning of Ken and Art’s driveway has been there for over thirty-years according to court documents. The power company originally installed the gate, which was supported by the information etched onto the old locks that were found on the gate. Over many years the gate became dilapidated. Being the friendly neighbor that Ken was, he took it upon himself to go ahead and fix the gate. It was nothing more than a friendly gesture – that’s all. Ken stated he installed a new post exactly where the old post went.

When Art saw the new post, he became “upset with Ken.” At first, Ken stated he would help move the gate when Art made claims that the gate was inappropriately placed. Ken then found out why Art wanted to move that post. Art reportedly didn’t want the newest neighbor using the legally shared easement. When the gate wasn’t moved, Art’s frustrations came to a head, and Ken was sued by Art over the property line dispute. Ken was accused of trespassing and destruction of property. 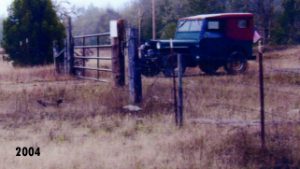 Ken said he was sued by Art three times. Two of the suits were dropped. The property dispute case ended, but the damage was not quite done. The friendship was over and the accusations had just begun.

As the friendship exhausted, stories about Ken by Art turned into seriously false accusations with damaging effects. Ken stated, “I started losing business.” When he’d walk into a bar or restaurant some of the usual friendly patrons began giving him the cold shoulder. 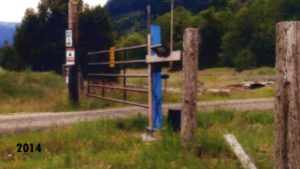 The new post, with electric opener for preexisting gate.

It wasn’t long before Art’s words caught up to Ken. Edward Snook, Editor-in-Chief of the US~Observer, eventually met with Art. Ken owed Snook some money for an ad in the US~Observer Newspaper. Snook wanted to know what kind of person Ken was according to Art. It wasn’t long before Art began making false statements about Ken. According to a deposition, Art told Snook, “Ken was operating his business illegally… he’s borrowed a bunch of money from other people and hasn’t paid them back.” Art mentioned specific names according to the deposition. Was all of this true? Essentially, Art stated that Ken was a liar and could not be trusted. According to Snook, Art, “was obviously trying to get me to dislike Ken.”

As Snook continued to communicate with Art, the character attacks against Ken continued. According to depositions, Art told Snook, “…he’s (Ken) molested (sexually) his daughters and had felonies…” Not only did Art openly make these remarks to Snook, he did so knowing that he was speaking with the publisher of a national newspaper. Perhaps Art was telling others in the community similar stories? Not the type of stories Ken is known for telling. These were serious allegations, which were completely unfounded. Ken has NEVER been convicted of a felony crime. Ken has never been arrested or convicted of sexually molesting anyone, especially his own daughters. Why would someone make such false and damning statements about another person?

Ken was left with no other option than to sue Art for the defamatory comments. It was believed at this point that Art was telling these horrible lies to others. How else was Ken losing reputable business, while getting the cold shoulder from those who were once the friendly type?

Ken filed suit against Art and the costly legal battle between the once friendly neighbors continued.

As anyone who has ever needed an attorney knows, the costs are not cheap. Trying to convince Ken to drop the suit, Art said that every time they (the attorneys) do anything it is costing us. Art continued, “It’s killing us.” But, Ken was damaged. The lies were public. And, Ken deserved to, at very least, have his name cleared in the community where he lives. As he recalls, “I couldn’t just up and quit” at that point.

Ken stated, “Serious evidence… recorded calls that proved Art was lying,” were never played for the jury. Serious objections were not made by Ken’s attorney as he looked back. “I was raked over the coals,” Ken explained while describing his experience in court. The case resulted in a no money award for damages. And, the damages for Ken reportedly continued long after the case.

Misinformation is rampant in this day and age. People are so quick to judge without having the facts. Art’s false claims about Ken were just that – FALSE. “There are still those in the community which I live who probably believe these horrible lies,” explained Ken. He continued, “I certainly pray that they now know my true character.”

Ken and the other neighbor are still friends. He’s finally moved on with life. He’s pleased that his name is cleared of the horrifically false accusation(s) by Art Olsen. If you want to know the truth about a person – do a background check. Don’t believe false and defamatory comments made by others. Art is reportedly a bitter man who does not like his close neighbors. According to witnesses, Art dislikes them because he has a legal obligation to let them use his driveway.

Editor’s Note: Word travels fast in a small community like Selma. If anyone has information regarding Art Olsen or Ken Legaux, we ask that you contact the US~Observer. Have other false accusations been made? editor@usobserver.com, or 541-474-7885.

Examining the Fallout of Experimental Prosecution