There is blood in the water and the public is hungry for the next sex abuser to be outed. One after the other, powerful people have been taken down, and it seems sex abuse allegations are big business – at the very least high ratings. 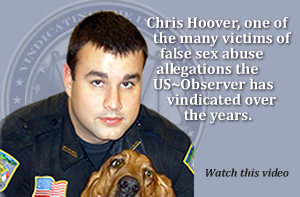 Never before have so many influential fallen on so many unsubstantiated claims. It is a witch hunt that frankly has been festering in our society for decades with sex abuse allegations being one of the only crimes not needing any evidence or secondary witnesses for successful prosecution. In some cases, the laws themselves assure punishment. Our society has determined that only the allegations matter. If accused, you are guilty. Period. And, you deserve a lifetime of punishment.

By no means am I suggesting that all sex abuse allegations are false. Also, I am not suggesting that those who are factually guilty of those heinous crimes shouldn’t be punished — in many instances I am for stronger punishment than what is currently allowable under law. I simply have no disillusions regarding the existence of false accusations; that even though someone may be convicted, they might not have actually been guilty.

Let’s face it, the court of public opinion can be a cruel judge, jury and executioner. Even more, it can be an irrational and powerful constituent, pounding legislators to create law that would assuage their constituency’s current emotional dilemma. Legislators, too, allow their emotions to run roughshod over a more reasoned approach to law crafting. It is this emotional drive that pushes the legislator to create laws that do not take into consideration the myriads of issues arising from such laws – especially sex abuse and rape shield laws.

On the surface these seem to be welcome pieces of legislation that seek to punish criminals and protect victims. However, many of these laws are used by prosecutors for an easier conviction, as they were crafted to make a defense almost, if not completely, impossible.

For instance, in Oregon you can be charged with crimes that have literally been defined as having no defense. The crimes themselves are simply abhorrent – adults attempting to, or having sex with a child under 16, or engaging in any manner of sexual deviancy with a child under 16. Who would be against having this be illegal? No one good, that’s for sure. But, that isn’t the point. How can we make any criminal charge defenseless?

According to Oregon Revised Statute 163.325, “In any prosecution under ORS 163.355 (Rape in the third degree) to 163.445 (Sexual misconduct) in which the criminality of conduct depends on a child’s being under the age of 16, it is no defense that the defendant did not know the child’s age or that the defendant reasonably believed the child to be older than the age of 16.”

But, in today’s age children often don’t act like kids, nor do they look their age. In fact, they can disguise themselves digitally as any age they want, and they often do. They can have profiles on adult sites, creating completely fabricated lives, and troll for older individuals for any manner of behavior.

Under the letter of the law, these young predators are considered victims – even if they have done this on more than one occasion; behavior which would most assuredly be withheld from the jury because of rape shield laws.

Why aren’t kids considered victims when they choose to kill another person – often resulting in being prosecuted as an adult? Why aren’t they victims when they skip school, or vandalize? In fact in Oregon, nearly 15,000 kids are referred into the justice system for criminal offenses per year. Why is it that if their deceptive behavior results in sex, they are instantly classified as a victim? In essence, what the law says, is they should know right from wrong when vandalizing, but not when they bed an older person. It is this type of blanket law that allows young predators to victimize older individuals. I’m not even really talking about huge disparities in age either! You can have just turned 18, meet someone who you think is your same age, because that is what they purport to being, and what all of their social media states. Next thing you know the cops are knocking down your door and you are being charged with a crime you didn’t know you committed, with no possibility of a defense. And, with a sex registry life sentence, what could have been a great life is destroyed.

While it is important to protect innocent lives, it is abhorrent to deny an individual a defense to an allegation. Remember, “innocent until proven guilty?”

Rape shield laws are a prime example of a well intended law that is used to deny an adequate defense. An individual’s previous deceitful behavior should be allowable to be heard by a jury. Just because they can be telling the truth doesn’t mean they are. However, it seems like any conversation about sex abuse, the alleged victim’s word is the final one, especially when supported by a bought-and-paid-for expert witness for the prosecution.

Many argue that there are few false sex abuse allegations when it comes to sex abuse claims – around 2-10%. They use the high percentage of convictions and lack of evidence of innocence as the basis for their conclusion. Their logic is, however, flawed. When prosecutors have upward of a 97% conviction rate when a case lands in their lap, you can bet that not every one of those individuals is guilty. In fact, with stacked charges and extortive plea deals, it utterly guarantees a conviction, and prosecutors know it.

We should craft laws that protect the innocent while also guarding those who are innocent victims of false allegations and prosecution. We should also hand over criminal investigations to an independent agency that isn’t bound to the prosecutor’s office. If we were to do that, I am sure convictions of sex crimes would be based on fact, not on allegations alone, as it is today. And, then we’d truly be protecting everyone equally.

Editor’s Note: If you are facing false sex abuse allegations, you may not find justice in our court system without the assistance of the US~Observer. Be like the MANY we have helped – be vindicated. Check out what we do, then call 541-474-7885.