Prosecutor and Police Chief Get Prison for Corruption 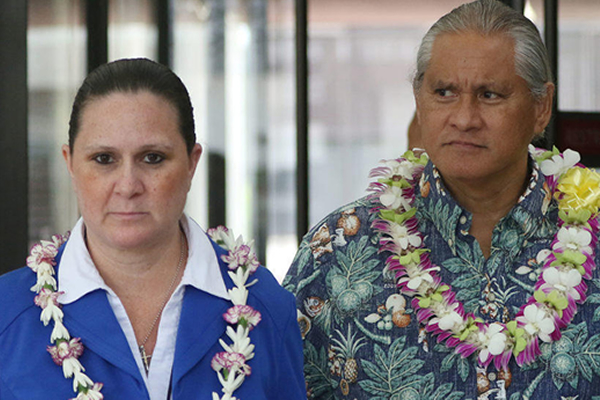 Honolulu, HI – A U.S. Judge has sentenced a once high-ranking prosecutor to 13-years in prison and her once police chief, ex-husband to 7-years in prison. The sentence was handed down to Katherine and Louis Kealoha on Monday, November 30.

According to the Associated Press, the ex-prosecutor “orchestrated a reverse mortgage scheme that forced her grandmother to sell her home, framed her uncle for stealing the Kealohas’ home mailbox, stole money from children whose trusts she controlled as a lawyer, cheated her uncle out of his life savings, convinced her firefighter lover to lie about their affair and used her position as a prosecutor to turn a drug investigation away from her doctor brother.”

The Kealoha’s were once a respected power couple. During sentencing, U.S. District Judge Michael Seabright had some powerful words for the estranged couple. While Katherine was the mastermind, Judge Seabright told Louis, “you did master the frame job that followed,” and the corruption could not have happened without the Honolulu Police Department.

A jury convicted the Kealohas of conspiracy in 2019, along with two former Honolulu police officers. Judge Seabright said, “Think about that, the chief of police of one of the largest police departments in the country… swears to tell the truth, the whole truth and nothing but the truth,” and then not only lies, but does so under oath.

60-year-old Louis Kealoha filed for divorce after they were convicted.

Clients seeking exceptional legal counsel. Do you have what it takes?