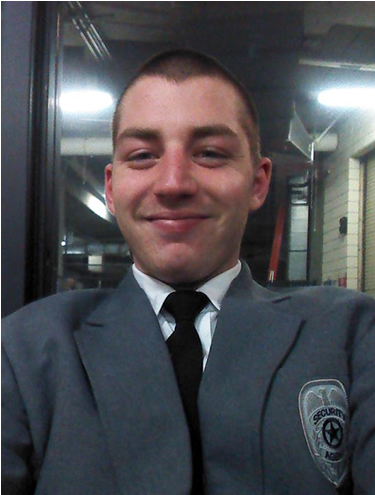 Golik provided the following explanation: “In an abundance of caution, because the judge has ruled that Vu could be called as a potential witness, we decided to reassign the case.”

Similar circumstances that led to Vu’s removal from the Starr case have resurfaced through his prosecution of Rodney Taylor Franck. In both cases, Vu converted a co-defendant into a compensated State’s witness. The difference in Franck’s case is Vu negotiated leniency for the co-defendant, Spencer Austin Pell, who confessed to committing the crime.

After soliciting the “murderer’s” cooperation, Vu made himself a witness at best, and a co-conspirator at worst, by participating in the development of Pell’s ever-changing statements.

VU PREPS PELL THEN DISMISSES HIM AS STATE’S WITNESS

A prosecutor runs the risk of eliciting false testimony by enlisting a witness who has motive to lie, and who will be rewarded for perjured statements. On June 9th, 2016, the State entered into a cooperation agreement with Spencer Pell. Upon fulfillment of its requirements, Vu promised Pell a deal for a lesser charge (Attempted Assault I) with a 7-and-a-half-year sentence along with immunity from a murder charge in trade for sworn testimony claiming Rodney Franck was responsible for the death of Chris Brewster.

During multiple interviews in Vu’s presence, Pell made wildly inconsistent statements and described events in conflict with State’s evidence. The discrepancies led to Vu’s cancellation of the agreement and Pell’s removal as a State’s witness. Despite failure to provide credible testimony, Pell was granted leniency as if the cooperation agreement had been fulfilled.

NO INVESTIGATION OF CONFESSED KILLER

On the night of April 23, 2015, in downtown Vancouver, an intoxicated 18-year-old male had a chance encounter and verbal dispute with a 53-year old stranger over a request to “bum a cigarette.” The argument evolved into a violent assault as Spencer Pell, “snapped” according to his confession in a police interview.

22-year-old Rodney Franck was with Pell that night. According to Franck’s statement, he continued walking when the dispute began. Franck turned around to see a chase ensue, then ran nearly three blocks after the two men. Franck recalled witnessing the initial blow to the victim that resulted in a fracture to Pell’s right hand. He reached the scene of the assault as Pell was pummeling the man on the ground with violent kicks to the head and body. After pulling Pell off the victim, Franck attempted to offer aid to the man who was covered in blood and breathing, but unresponsive.

Following the attack, Vancouver Police Department (VPD) detectives failed to conduct a thorough investigation. Key evidence was not gathered or preserved, and neglect to conduct necessary interviews resulted in loss of critical information. 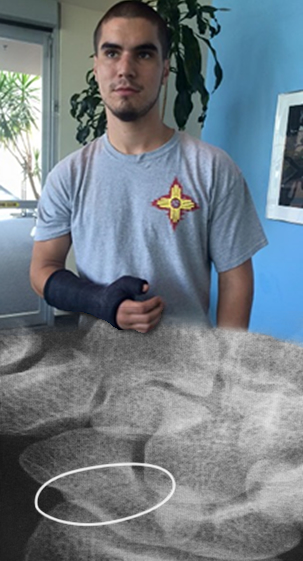 On January 26, 2016, accompanied by his step-father and a close friend, Pell voluntarily turned himself in to police and confessed to the violent assault of Chris Brewster.
On the night of the assault, law enforcement detained and questioned Pell near the scene of the crime. They took photos of his badly injured right hand, identified he was drunk, underage and on probation, yet they released him to walk home. No follow up investigation was conducted regarding Pell’s potential involvement in the assault.

REFUSAL TO RE-EVALUATE THEORY OF GUILT

During the weeks between Franck’s arrest and Pell’s surrender, jail phone conversations between Franck and others revealed that Pell was the assailant. Evidence suggests Franck’s jail phone calls were closely monitored, but no action was taken by law enforcement to locate or question Pell.

Immediately after Pell’s confession, VPD Detective Neil Martin declined to arrest him. Pell was arrested that day only upon the insistence of his accompanying friend and “father figure” Lynn Cargile. In his police report Detective Martin wrote:

“Pell, Cargile and I spoke about the court process and the fact that Pell may be summoned into court once the Prosecuting Attorney (PA) reviewed the file and chose whether or not to charge him. Pell and Cargile decided that it would be better for Pell to be arrested and booked on this date (1/26/16) to get the process started. I told Pell such was his choice as I had already told him I wouldn’t arrest him today. Pell confirmed he wanted to be placed into custody. I told the men I would need to complete some paperwork and that they could wait in the front lobby so Pell could smoke and make a phone call.”

In the wake of Pell’s admission of guilt and arrest, he should have been considered the lead suspect in the Brewster assault. Instead, he became a candidate for significant leniency.

According to police reports and court files, no official investigation into Pell’s involvement in the crime has been conducted to date.

Spencer Pell signed the prosecutions cooperation agreement on June 9, 2016. That was just two days after the death of Chris Brewster, who had spent over 14 months in a comma after the assault. The agreement required Pell to give “full and truthful answers to any questions asked.” The contract included safeguards to test the credibility of Pell’s statements:

“The Defendant agrees to submit to polygraph examinations at the request of the State to verify the truthfulness of Defendant’s statements.”

In response to verifiably false statements made by Pell during interviews, no polygraphs were requested by the prosecution.

Breach of agreement was defined as:

“The parties stipulate the Defendant will be in breach of this agreement if the Defendant makes any statement at any interview, hearing, or trial that is not completely truthful.”

Even though Pell repeatedly violated the agreement, he suffered no consequences. Vu failed to enforce the requirement for Pell’s testimony to be truthful. Ultimately, Vu withdrew the agreement and moved forward to maliciously prosecute Rodney Franck.

PROSECUTOR MOTIONS TO WITHHOLD “EVERYTHING PELL” FROM JURY

The Sixth and Fourteenth Amendments to the US Constitution guarantee a defendant’s rights to a fair trial and to present a complete defense. When Vu’s plan to groom Pell as a State’s witness failed, he sought to obstruct the defense by submitting motions to prohibit Franck from calling Pell as a witness, and to prevent admission of the following evidence:

• Pell’s confession to police.
• Photos and medical records of Pell’s broken hand.
• Pell’s out of court statements claiming responsibility for the assault.
• Pell’s inconsistent and false statements made while bound by the cooperation agreement.
• Evidence of Pell’s negotiations with Vu and failed cooperation agreement.
• Franck’s Motion to Dismiss for Government Misconduct.
• Pell’s 2016 Clark County jail disciplinary records of:
a. His brutal beating of an older inmate.
b. His recorded jail phone call threatening a DV victim of another Clark County jail inmate.
• Testimony, statements, or documents showing Pell’s affiliation with, or desire to join, white supremacist groups.
• Evidence of tattoos or body art on Pell that indicate affiliation with white supremacist groups such as swastikas, crosses, or any combination of the numbers 18 and 44.

Vu’s motions to exclude “everything Pell” have yet to be ruled on by Clark County Superior Court Judge John Fairegrieve. If granted, Franck’s constitutional right to confront his accuser would be eliminated. This will effectively remove the ability to present a defense against Pell’s uncorroborated allegations adopted by the prosecution.

TRADING ETHICS FOR TESTIMONY, ANOTHER GHOST FROM THE PAST 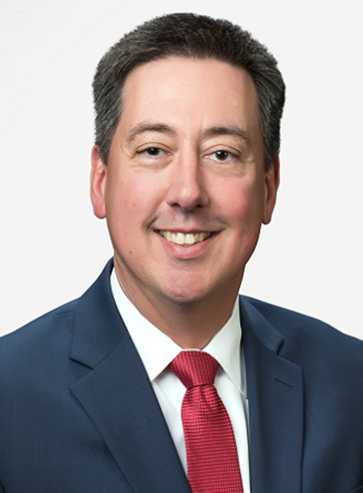 In October 2010, Seattle attorney Neil Fox filed a motion in Clark County Superior Court to vacate his client’s conviction citing serious acts of Prosecutorial Misconduct on the part of then Deputy Prosecutor Tony Golik. At the time of the filing, Golik was campaigning for the open seat of Clark County Elected Prosecutor.

In his 2010 motion, Fox revealed that Tony Golik did not disclose, as required by law, full criminal histories, outstanding warrants and pending criminal charges of four of the State’s witnesses at trial. Golik also failed to disclose that prosecution witness, Zachary Brown, had entered into a cooperation agreement to provide testimony in trade for the State’s removal of two No Contact Orders in effect against Brown. The covert deal was reached over the objections of Brown’s community corrections officer.

Golik was present during a witness interview when Brown mentioned the lifted NCOs, but Golik did not admit to the State’s role in making that happen. After the No Contact Orders were rescinded, Brown assaulted the woman they were intended to protect.

Cooperating witness Brown also had pending drug charges that Golik agreed not to pursue as a part of the incentivized trade for testimony—another fact that was not disclosed to defense as required by law. Fox revealed in his motion, “As a result of the Prosecutor’s office’s failure to pursue the other criminal charges against Brown after giving testimony, Brown was free to commit a rape and kidnapping in Portland, charges to which he pled no contest.”

Court records verify Zachary Brown was convicted on Kidnapping and Rape charges months after acting as a State’s cooperating witness.

A GUILTY PROSECUTOR, A CANCELLED WITNESS & AN INNOCENT MAN

Clark County has a history of State’s “cooperating-witness-testimony-gone-wrong” that extends far beyond the three cases mentioned in this report. Through the continued prosecution of Rodney Franck, a failed attempt to convert confessed killer, Spencer Pell, into a witness for the prosecution has been exposed and will remain in record.

Spencer Pell was an angry young man who, by his own statement to police, said he “snapped” when Brewster hit him. Clearly admitting guilt, Pell continued, “I’m your guy … That was me that hurt that man.” Despite his admission, Pell was awarded a plea agreement that will make him eligible for release in the next few years. Meanwhile, if convicted, Rodney Franck could spend the rest of his life in prison.

Editor’s Note: The Rodney Franck Murder case is a prime example of how unethical, corrupt prosecutors strip Defendants of their Constitutional right to Due Process and Equal Protection. Whatever it is that drives prosecutors like Kasey Vu, one thing is certain, it absolutely isn’t seeking justice! Email: editor@usobserver.com, or call 541-474-7885 if you have any information regarding this case. Every tip helps! 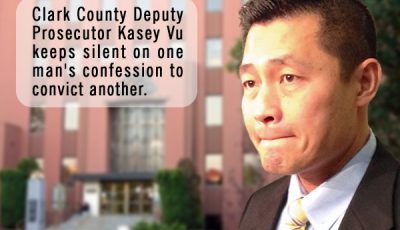