Update: On July 1, 2019, Navy Seal Eddie Gallagher was found innocent of premeditated murder, along with other war crime charges. Although the jury handed him a “not guilty verdict” on many charges, they did convict him of, “posing for a photo.”  According to CNN, his wife stated he was, “finally vindicated” after being “terrorized” by a government that her husband had fought for. Eddie Gallagher is a decorated Veteran. Many will never know what our soldiers endure while in combat. Today, he can rejoice with those who know him best, as a free man! 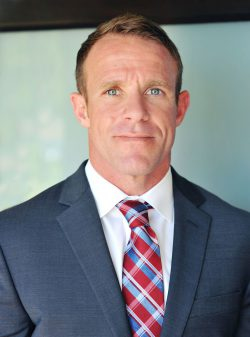 Eddie Gallagher is a hero to many who serve in the U.S. Military. He’s also a hero to many who do not. As a highly decorated war veteran, Eddie has seen eight overseas and combat deployments. He’s been awarded 2 Bronze Stars with “V” for Valor. He’s been awarded a Navy Achievement Medal with “V” for Valor. His achievements also include two Navy and Marine Corps Achievement Medals, a seven month deployment with the Marine Corps, Seal Team 7 Sailor of the Quarter, Seal Team 7 Sailor of the Year, Naval Special Warfare Group One – Sailor of the Year, four Good Conduct Medals and lastly, the Number One Chief at Seal Team 7.

Despite  evidence of innocence and all of his achievements, Chief Gallagher is being persecuted, and prosecuted for a crime which he maintains his innocence. In an all-out pursuit for conviction, prosecutors from UCMJ and investigators from NCIS overlooked, hid, and/or denied many important pieces of evidence. Their actions have kept this highly decorated war hero locked-up inside a brig in San Diego, California for several months.
Today, Chief Gallagher rots in a cell nearly 3,000 miles from his wife and three children pending trial for the “alleged” murder of an ISIS Fighter in 2017.

Statement by Bernard Kerik, Newsmax. Kerik was “New York City’s Police Commissioner, and in command of the 55,000 men and women of the NYPD…” during the attack on 9/11.

It appears he (Gallagher) had a small group of malcontent subordinates, that Gallagher and others felt were questionably unfit to serve in the elite unit, and that he had verbally reprimanded for not wanting to engage in combat.

Many believe this to be the reason Gallagher was set-up.
According to the Navy Times:

Iraqi Emergency Response Division commander Maj. Gen. Abbas al-Jubouri was interviewed in Iraq by NCIS, and told them that Gallagher was the “best Chief” of any of the American forces he has worked with. He admitted that he was “very strict with his men… was very aggressive and hard on his men, never wanting to stop working or take a break. Chief Ed never wanted to stop and he worked all the time.
Al-Jubouri was in Mosul when the ISIS fighter that Gallagher is alleged to have killed was captured, said he was found “bleeding badly” from gunshot wounds “with little chance of survival.”
An Iraqi Col. Issa Kadhim reportedly saw SEAL medics, lead by Gallagher, attempting to save the terrorist’s life, in hopes of interrogating him, and did not see Gallagher attack the terrorist.
Both men were adamant to NCIS that Gallagher only tried to save the ISIS fighter who died of his injuries and not at the hand of Gallagher, yet this has been completely ignored because it did not fit in the prosecutor’s ‘crime theory.

Several soldiers who served with Chief Gallagher during the mission that led to his arrest have voiced their outrage over his false charges. They have claimed his innocence. They were there when he attempted to save the dying ISIS Fighter which he is accused of killing. 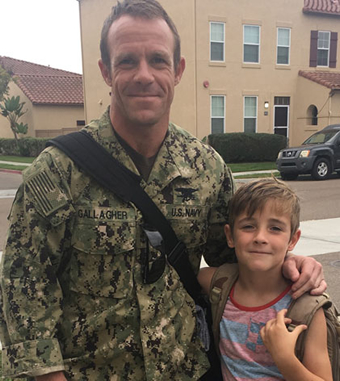 On a website created to help Chief Gallagher, his brother Sean recounts the actions taken after Gallagher’s arrest:

In June 2018, a band of NCIS thugs in full combat gear, masquerading as SWAT, watched the family home of a highly decorated war hero whom they had locked up in custody on charges of mistreating an ISIS terrorist. They were waiting for his wife to head out for work, leaving two children at home alone. With full knowledge there was no adult in the home, NCIS thugs stormed the house and pulled the young children of an American war hero out of the house at gun point in their underwear.

Sean Gallagher told Fox and Friends: ‘This investigation is not about justice and the truth, it’s about a win.”

According to an article in the Navy Times:

NCIS took the word of the accusers and ran with it, never stopping to think about reality, and never stopping to listen to logic or reason. An argument can be made that General Abbas [al-Jubouri] and Colonel Kadhim are the most-neutral — or least biased — witnesses in the entire case. Every other witness will be accused of either trying to take down Chief Gallagher to protect themselves, or trying to cover up a crime for him because they love and respect him.
The two Iraqi officers, on the other hand, have absolutely no interest in the matter whatsoever. According to NCIS, both vividly recall the event, and both are adamant that Chief Gallagher only tried to save the mortally wounded ISIS fighter, who died of his injuries — not at the hand of Chief Gallagher. This was completely ignored by NCIS because it does not fit with what NCIS had already decided to believe.
General Abbas concluded, “I have worked with American 5th Special Forces Group, 7th Special Forces Group, 10th Special Forces Group, and Navy SEALs — of all I have ever worked with, Chief Ed is the best.”

Ending his outcry for those with power to help Gallagher, Former NYC Police Commissioner Kerik stated in a Newsmax article that, “We owe men like him, and all who would follow his example of service, sacrifice and valor, the benefit of doubt, the presumption of innocence, and a fair trial, and that has just not happened, which is why I respectfully urge Secretary Mattis and Secretary Spencer to help right this wrong.”
To follow Chief Gallagher’s case, or to help, logon to: www.justiceforeddie.com. #FREE EDDIE