“Unbelievable… You made the ATF leave me alone!”

Russ Newkirk was charged with multiple firearms felonies along with possession of marijuana, and obstruction after he had been pulled over for an expired tag. Newkirk’s firearms collection had been in the car and was confiscated immediately. It wasn’t long before there was a connection found between the prosecutor and Russ Newkirk. The prosecutor, John Rodabaugh, was none other than the Vice President of Washington Arms Collectors (WAC), an organization Newkirk had been involved with for a lengthy period of time. For whatever reason, Rodabaugh had set his sights on Newkirk, and he came out guns blazing, charging him with everything he could think of.

Newkirk entered into a small plea in order to get his weapons returned, but the ATF put a hold on the return of his weapons. This was done in case there was a pending federal case against him. It was then he enlisted the US~Observer’s help to recover his weapons.

In the article “Russ Newkirk targeted by the Gun Show Bandit?” Newkirk recalled:

“Within 72 hours of the US~Observer signing-on to help me, I had not one but two BATFE agents on my doorstep wanting to arrange the return of my property.” Newkirk went on to say, “They said they had no interest in me or my guns and apologized for the more than one year they had been held.”

One thing is certain, if you are facing firearms felonies, Russ Newkirk will tell you there is no one better to help you than the US~Observer. 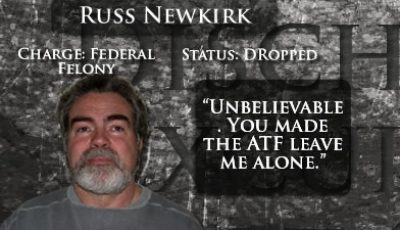 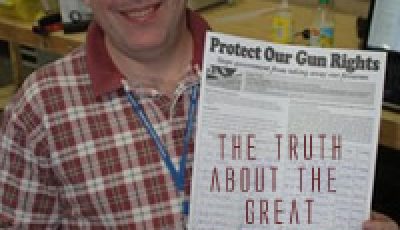