“Innocent until proven guilty is a myth. Joe was exceptional. My case was dismissed without going to trial.”

Jason was inquiring about service at a bar when he was asked to leave. Not being under the influence of alcohol, combined with knowing the owners of the establishment, Jason shared words of concern with an aggressive bouncer. With rude tone, Jason and his friends were asked to leave the establishment. Jason, again knowing the owners, informed the bouncer that he would be in contact with his superiors. That’s when things went horrible wrong. As Jason was exiting the establishment, he was attacked by the bouncer. After being physically assaulted, Jason defended himself – laying out the bouncer. Cops were called. Stories were told. Jason was arrested and charged with Assault. Jason knew he was innocent. He was wrongfully charged with assault. Knowing is one thing – proving is another. How was Jason going to prove his innocence?

Wrongfully Charged with Assault: How to win?

Jason enlisted the help of the US~Observer newspaper. Crucial evidence that proved Jason was telling the truth was obtained. There was no question his charges should have immediately been dismissed. The bouncer should have been charged with filing a false police report. Sadly, the prosecutors office wanted to play games. After having the necessary evidence needed, the prosecutor’s office initially refused to dismiss Jason’s wrongful assault charges. The US~Observer published the facts of Jason’s case – leaving no room for error if he was brought to trial.

Once it was clear that Jason wouldn’t be accepting any deals, things changed. The prosecutor knew that not only was the evidence in Jason’s favor, there was more. That same crucial evidence was already exposed by the US~Observer. Knowing these facts, the prosecutor dismissed all of Jason’s charges. Just like that, Jason was saved from a wrongful prosecution. His case was resolved without a costly trial.

If you or anyone else you know have been wrongfully charged with assault, contact the US~Observer. We can help. 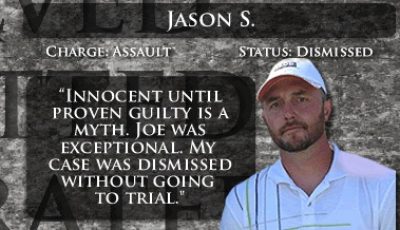