The War on Accountability

By David Kirk West
and Kathryn Steele
From #BlackLivesMatter to widespread buzz about Netflix’s documentary series Making a Murderer, America’s cultural zeitgeist is beginning to support increased police accountability in a very real way. Predictably, though, talk of a “war on cops” is also on the rise. Not just coming from police unions and conservative pundits, either. A 2015 Rasmussen Poll found that 58% of likely U.S. Voters believe that there is a “war on cops” while just 27% disagree. So, are the claims of a war on cops true? In short… No.
On March 2nd, Medford, Oregon’s very own NBC Affiliate KOBI-TV ran a story with the headline “Line of duty deaths by gunfire up 1200% in 2016.” An alarming claim, and one that anyone with half a brain and an ounce of responsibility never would have written. It’s true that as of March 2nd, 2016, 12 officers had been killed in the line of duty by gunfire versus only one during that same time period last year (And 2015’s death was a training accident, to boot). An incredibly obvious problem arises, though, when one looks just eight days ahead in 2015’s statistics, because three more law enforcement officers (LEOs) were killed by gunfire between March 4th and March 10th last year.
For KOBI’s alarmist headline to have remained accurate just 8 days past its publication, an additional 155 officers would have to have died by gunfire between March 2nd and March 10th. Since that didn’t happen, the number of LEOs killed by gunfire so far in 2016 is actually only 200% higher than it was at this time last year. Even claiming a 200% rise in line of duty LEO deaths would still be disingenuous to the point of basically being a lie, though, because if you take into account ALL of the officers who died in the line of duty between January 1st and March 10th, you’ll come up with 18 officers for 2016… And 23 for 2015.
Yes, there were actually MORE line of duty deaths during this same time frame in 2015. In fact, car accidents were 133% higher at this time last year, and there had been a whopping SEVEN heart attacks versus this year’s zero. Does that mean that cops have become radically healthier and started driving more safely over the last year? No, of course it doesn’t! The real takeaway here is that when statistics are based on such small sample sizes, it’s completely asinine to look at just a few weeks worth of data and expect to learn anything meaningful from it.
Month-to-month and even year-to-year “spikes” in line of duty LEO deaths make easy headlines, but when long-term trends are considered, it becomes quite clear how ridiculous the claims of a growing “war on cops” really are. The chart below illustrates this perfectly by mapping thirty years worth of data, not just tiny, weeks-long blips. 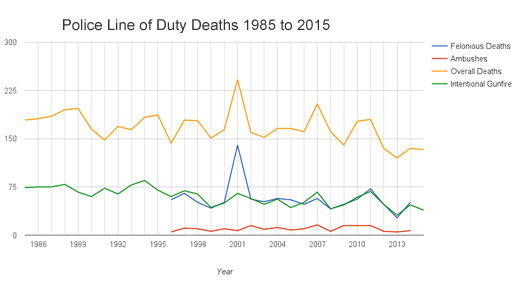 The orange and green lines represent data from the Officer Down Memorial Page, and the blue and red lines were made with data from the FBI’s annual “Law Enforcement Officers Killed & Assaulted” reports (reports weren’t available for 2015 or before 1996). Here you can see that over the last thirty years, line of duty deaths for LEOs has had a noticeable overall downward trend. Ambushes—which one would think would be up if there really was a war on cops—hit their lowest 3-year-streak by far from 2012 to 2014. 2013 was actually the safest year for American cops by every measure since 1887, and 2015 was the second safest. That revelation casts the technically statistically accurate claims of “rises” in police deaths in an entirely different light, doesn’t it?
Now compare that chart to this Google trends chart of the relative popularity of search terms like “war on police.” As you can see, searches for the term spiked significantly throughout 2015—the very year that we just established as essentially the safest year for cops in well over a century.

It’s a tragedy when a cop is murdered same as it is with anyone else, but let’s not kid ourselves: there’s no war on cops in any physical manner, period. What we’re seeing is a long overdue acknowledgement of the scope and severity of police brutality and systematic judicial injustice in America. According to a Department of Justice study conducted way back in the year 2000, 84% of officers admitted to witnessing fellow officers using more force than necessary in an arrest, and 61% admitted to not reporting serious abuses by fellow officers.
Obviously there’s a problem here, and anyone with an interest in justice should want to see something done about it. The “war on cops” rhetoric that gets bandied about so much is not only dishonest, it’s dangerous. It distracts the public from the truth, and worse: it perpetuates the idea among LEOs that their job is growing ever more dangerous. With this kind of propaganda inundating cops on a daily basis, is it any wonder that the number of civilians shot by police has been steadily rising over the last 20 years?
David Kirk West is a filmmaker and liberty activist who grew up in the mountains of Northern California and Southern Oregon. He is currently working towards directing his first feature film and is the writer, director, cinematographer, and editor of a variety of both fictional and documentary short films. His films and videos
can be viewed on his YouTube channel at YouTube.com/BuckingTheSystem.
Kathryn Steele was born in Dallas, Texas. She graduated with a BA in Political Science and a Minor in Communications from The University of Texas at Arlington. Kathryn has worked as a political consultant and coordinator for several conservative non-profits as well as Presidential, Senatorial, and Congressional campaigns. Kathryn’s activism has been featured on a wide range of networks and publications, and more of her writing can be read on her blog at TheSteeleChronicles.com.