Thirteen-Year-Old Incarcerated Without Committing a Crime

Jackson County, OR – A thirteen-year-old Oregon boy was sentenced to 90 days for not wanting to associate or communicate with his mother. The boy claims that his mother bit his ear and that she is now denying doing so. This young man did nothing wrong, yet he has basically been incarcerated without having committed any crime whatsoever – unbelievable!

On February 1, 2017 Brian Hegler, under court order by Jackson Co. Circuit Court Judge Timothy Gerking reluctantly drove his thirteen-year-old son to New Vision Wilderness Therapy, almost 200 miles away from their home in Medford, OR. The court order stated that Brian’s son would have to attend the program which specializes in, “treating issues of adoption, trauma, anxiety and addiction,”for 90 days, or until completion.

According to witness statements, the February 1st court date was originally meant to be a brief custody hearing between Brian and his ex-wife Carla regarding Brian’s parenting time with their daughter, as Brian only has full custody of their son. With a swift change of events, after parenting time with the young girl was heard, the court then switched gears and went into another issue – Brian’s son. Brian was completely caught off guard as he didn’t have legal representation at the time, and more importantly, he was confused by the courts actions. In an instant, his son was pulled away from his family, friends, school and sports under court order by Judge Timothy Gerking. The boy’s father, and legal custodial parent was helpless. The boy was told he would be spending the next 90 days in a program that typically deals with troubled youth, some of which have drug habits.

One problem with the program is that the son doesn’t have drug habits. He wasn’t failing in school, nor was he in trouble with the law. So why would the son be forced into a program against his will, and the will of his Father? A man by the name of Scott Banderoff was part of that reason. Dr. Banderoff (Psychologist) was recommended by Family Therapist Blondine Leavitt who was hired by the boy’s mother, Carla. Banderoff met with the boy and produced a report that focused on the boy being taken from his father. Carla and Brian have been fighting in court to maintain their rights as parents since they were divorced a few years ago.

Shortly after the divorce, the boy claimed that his mother Carla had bitten his ear during a dispute. When police were contacted, Carla reportedly lied and stated she had never bitten her son. Since then, the boy has not wanted a relationship with his mother according to witnesses. To this very day, Carla has yet to admit she actually had bitten her son’s ear. So, the question remains – why is the boy being punished and stripped from everything he’s ever known? According to Psychologist Banderoff, the boy has a problem with authority, something close relatives reported as, “a blatant lie.”

Causing more concern was Dr. Banderoff’s own statements to Judge Gerking while testifying at the hearing where the boy was ordered to attend the program. Although Dr. Banderoff never testified regarding the boy’s concerns about his mother Carla biting him, Dr. Banderoff was able to tell the judge that he’s, “…not an expert on (parental) alienation,” which is one of the allegations against the boy’s father becuase the boy doesn’t want to see his mother until she confesses. Dr. Banderoff also stated, “I’m not following (son’s) school performance closely,” which caused greater concern for the boy’s father. Brian stated, “Why would a judge take my son from me – out of my custody, and remove him in the middle of a school year when he’s been gradually doing better, not worse?” Furthermore, the real reason for taking the boy was because of a flawed relationship with his mother Carla, not an authority problem according to witnesses.

A strong allegation against Dr. Banderoff’s recommendation for the boy to attend Wilderness Therapy was reported by one witness who stated, “he (Bandoroff) is biased and likely has a financial connection to the program.”

During testimony, Dr. Banderoff stated, “I’m obviously biased, I’ve spent over thirty years in wilderness therapy…” Dr. Banderoff claimed he was previously the clinical director for a wilderness therapy program. Continuing, Banderoff said, “These programs aren’t inexpensive. Although this is one of the more reasonably priced programs… If every kid would go to a wilderness program, we’d have a much better world – unless you’re gonna have to pay for it, then you’d have that to lose (laughing). I think they’re $450.00 a day. I would think (the son) would need closer to 90 days… would be my prediction.”

Not only was the boy placed in a “therapy” jail against his will, and his Father’s, there is likely to be an enormous bill due that any normal parent would likely not be able to afford – all ordered by Judge Gerking.

In the last few weeks, it was reported that the boy had medical issues while confined to the program. His father Brian reportedly suffers from Raynaud’s disease, which is also likely what his son is suffering from. Raynaud’s (ray-NOHZ) disease causes some areas of your body — such as your fingers and toes — to feel numb and cold in response to cold temperatures or stress. Worried about his son being outdoors in Bend, OR. during extreme cold temperatures, combined with him potentially having Raynaud’s, Brian reportedly contacted the boy’s doctor and inquired further. It was stated that the boy’s primary doctor wanted to examine him. Out of concern for his son, Brian drove the nearly 400 mile round trip attempting to bring his son home so that he could get the medical attention he deserves, with a doctor that Brian trusts – his son’s primary doctor.

Brian was told his son was fine when he finally made contact, but he wasn’t allowed to see his son, or provided with any medical documents to ensure him that his son was okay. Instead, Brian was sent home. His concerns for his son’s health were essentially written off when Brian received a letter in the mail just a few days after his return home. The letter, written by Judge Gerking stated that a psychologist and counselor from the program had advised him that his son is exhibiting “neurological symptoms suggestive of Raynaud’s Syndrome which they felt could be treated locally in Bend, if necessary…”The judge also stated that he was told Brian was, “not entirely cooperative in the Program; and (Brian) has made statements that he wants/intends to remove (his son) from the Program.”

The problem with Judge Gerking’s letter is that he was reportedly deceived by the Wilderness Therapy representatives. Is seeking medical treatment for your child considered, “not entirely cooperative?” Brian was being cooperative. Brian was simply worried about his son’s health and voiced his concern, only to be met with opposition by someone who doesn’t even have a child of their own (counselor at the program). Brian was told he could not take his own son to see the Dr. of his choice – again, the boy’s own doctor.

Judge Gerking finished his letter by stating, “Until further order of the court, (your son) shall remain in the Program…”

This entire mess has caused deep concerns for the boy’s family about his wellbeing. It was reported that all of this was caused by the boy’s own mother, Carla. Brian’s son is deeply upset with Carla according to witnesses and his being confined to a program that he didn’t need will only cause a deeper disconnect in their relationship, according to one relative.

As of today, the young boy is still confined to the Wilderness Program. If the court does not intervene and allow him to be seen by his own doctor, then his stay at the program could be indefinite according Judge Gerking. One thing is certain, once the 90 days is up, there will be a bill for over $40,000.00! Several witnesses have stated that the boy’s mother, Cala Hegler, could put a stop to this if she wanted to.

Editor’s Note: What was simply a custody dispute has turned into a destructive act against a child. If this boy can be imprisoned like this without having committed a crime, any of us can. We are currently preparing an in-depth article on this case, based on two months of investigating and surveillance. 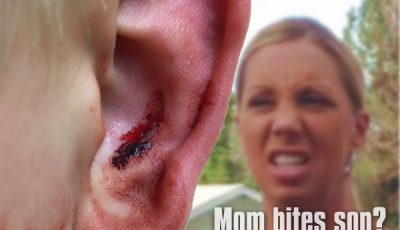