“Oregon Department of Human Services (DHS) relies on the flawed views of their prejudiced and opinionated caseworkers, which results in a public liability that is paid out more times than most realize.”
–Edward Snook, Editor-in-Chief of the US~Observer

Douglass County, OR – Uudam Bluetear was born premature. According to the Oregon Department of Human Services (DHS), this simple event gave them the right to step in and remove the Bluetear’s son from the NICU unit at the hospital. It was incredibly heart wrenching to have their fragile newborn son literally stolen from them by DHS at the hospital when he was only 13 days old. The Bluetears were left wondering if they could ever take their son home. It was going to be a long hard fight.

The term, “Due Process” meant nothing to DHS

In court, DHS gave this reason; “The parents can’t deal with their child’s medical needs without ‘OUR’ (DHS) help, because they are drug addicts, alcoholics, and mentally handicap.” How did DHS come to this conclusion? It was simply an excuse used by reportedly out-of-control DHS caseworkers, Cindi Corrie, Kivonna Gleghorn, Sandy Henry, Dan Pierre, Jeri Ruben, and others within the agency. Many years ago, DHS had a experience with Snowwolf Bluetear, which left them prejudiced against him. Corrie’s and Gleghorn’s accusations against the Bluetears were unfounded but became DHS’s official position. Nothing DHS said about the Bluetears was substantiated with hard facts. No drug screening. No proof of the horrific allegations. There was no home assessment, and no investigation into their abilities to care for their newborn son.

After Anna Bluetear gave birth to her son, the NICU unit took her breast milk and gave it to him while she was in recovery at a different hospital from Preeclampsia. Later, DHS deliberately denied their son his mother’s milk. According to medical professionals, her milk quite possibly could have prevented some of his medical issues. So why would DHS do this? According to Anna, DHS claimed her milk was a drug-contaminated biohazard. It was a claim DHS had no proof of. DHS never tested her milk.

Uudam was born with a condition known as Plagiocephaly, which is a misshapen head. This alone typically doesn’t have any serious effects on a child’s health, but Uudam reportedly suffered greatly under the care of the foster family DHS had placed him with. While in their care Uudam had several life threatening events. Luckily, Uudam survived these “near-death” experiences. When DHS caseworker Kivonna Gleghorn called to inform them of this, they were told, “not to get upset, remain calm and no, you’re not allowed to visit your dying son in the hospital.”
Every subsequent trip that their son made to the hospital resulted in the same denial. The first set of foster parents eventually “abandoned Uudam” at the hospital. Instead of returning Uudam to the Bluetears, DHS located a new set of foster parents with some medical training.
DHS has this “transition home slowly policy,” however, when they “ruthlessly kidnapped” (legally aided by the court) their son, there was no slow process about it.

The Bluetears went from seeing their son one hour a week to two days a week for a total of four hours a week via the use of Southern Oregon Goodwill Industries (SOGI). Now, seventeen months into this battle the Bluetears have their son at home for five hours, two days a week.

It’s been an arduous battle. As the Bluetears explained, “its difficult dealing with state appointed attorneys who only make a little bit of an effort as long as you constantly remind them of your case and the importance of moving forward on your case.” They continued, “So, when a friend told us about the US~Observer and how they could possibly help, we contacted them ASAP. It is a welcome feeling knowing that you’re not alone in your battle. Ed Snook listened to our case and took the time to show up to the court hearings with us.
The US~Observer applied pressure to the Oregon Department of Human Services, and the caseworkers on our case, which has helped. They published the truth about our injustice. So, with the US~Observer we are fighting to terminate DHS’s wrongful hold upon our lives.”

Before Cindi Corrie wrote up the transition home plan she conducted an in-home assessment. She sat in the living room with the Bluetears and Uudam’s Grandfather. She talked about the pro’s and con’s of Uudam’s coming home. Some of the con’s she mentioned where that Mrs. Bluetear was already caring for her disabled Father, so how could she care for a medically fragile child as well? This affected Uudam’s Grandpa negatively. Cindi’s words made him feel that it would be better for his grandson’s return home if he just wasn’t around anymore. 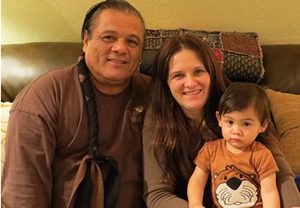 Now, the plan is a few more overnight visits before the Oregon Department of Human Services returns Uudam home on December 20, 2017 (nineteen months later). Ironically this is Uudam’s Grandfather’s birthday. His Grandfather constantly asked, “where is my grandson?” Grandpa was a World War II U.S. Navy Veteran, who eventually died waiting for his grandson to come home.
The Bluetears have been through more than most parents could ever endure. They have successfully fought to bring their young son home. Finally, that day has come. Taking the facts of their case and making them pubic was instrumental in forcing DHS to do the right thing.

It will be a bitter-sweet Christmas this year for the Bluetears. They will finally have their son at home where he belongs. However, the horrific shock of having him taken without justification will forever haunt them. Not being able to have the child’s grandfather there will also hurt. Happily, the relief of knowing they are finally able to parent their child without wrongfully being under a DHS microscope will bring peace to the Blutears.

Editor’s Note: If you, or someone you know is facing unwarranted accusations by Oregon Department of Human Services (DHS), contact the US~Observer. Investigating and exposing the facts of a wrongful abduction could be the best choice a deserving and loving family could ever make. Email: editor@usobserver.com, or call 541-474-7885. To read more about the Bluetear case, logon to usobserver.com and search, “Bluetear.” To read more about the Bluetear case, click here: 1, 2.