Christopher Culp to step down from bench 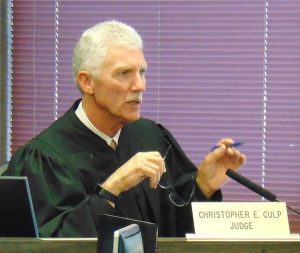 Okanogan County, WA – Okanogan Superior Court Judge Christopher Culp has decided to retire this spring ending a successful 35-year career in public service as an elected official in the community.

In a letter to Washington Gov. Jay Inslee, who will appoint his successor, Judge Culp said his retirement will be effective Mar 31, 2022.

Culp said in 2020 when he announced that he would seek re-election, it would be his final four-year term on the bench. Judge Culp’s term runs through the end of 2024. Gov Jay Inslee and his legal counsel are in the process of reviewing applications and vetting candidates to replace Judge Christopher Culp. Two candidates submitted applications to Inslee’s office; Robert Grim, who recently resigned as one of Okanogan County’s District Court judges to focus on his private law practice in Winthrop, and Leone Reinbold, an attorney in Okanogan.

Culp, 66, has served as a judge for over 35 years. In Nov 2011, Christine Gregoire, WA governor at the time, appointed Judge Culp to the Okanogan County Superior Court bench. In 1986, he was elected to the Okanogan County District Court after four years in private practice. Culp served as a district court judge since 1987 and was appointed superior court commissioner in 1991. He also served as a superior court judge pro tem since 2002. Culp was elected to full terms in his current position in 2012, 2016 and 2020. He was unopposed in those elections.

Culp earned a bachelor’s degree from the University of Washington and a law degree from Gonzaga University School of Law. Culp’s community activities included service on the Omak-Okanogan Rotary Club board of directors and membership in the Tonasket Community Cultural Center.

On Feb 2, 2022, Inslee appointed Robert Grim to the Okanogan Superior Court.  Grim  will need to file for the Nov 2022 election and win, in order to serve out the remainder of Judge Culp’s term which ends Dec 31, 2024.