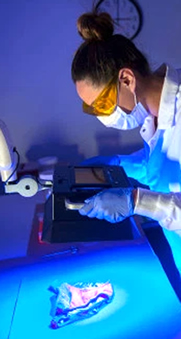 For over thirty-years, the US~Observer Newspaper has championed helping those who have been wrongfully charged or convicted of crimes which they never committed. Understanding how wrongful convictions occur often requires the use of experts. Today, there is a growing movement by experts who question anecdotal science, also referred to as “junk” science and its application in courts of law. Understanding faulty science is extremely important, especially early on in the process. One reason to understand the accuracy of evidence is because courts across the United States are not equal. Admissible evidence in one state may differ from others.

The fight to secure a conviction for prosecutors starts when criminal charges are levied against a defendant. Rightfully so, the evidence used to file criminal charges immediately becomes scrutinized by both prosecutors and defense attorneys alike. When compared to other types of evidence, anecdotal evidence is generally regarded as limited in value due to a number of potential weaknesses, unlike empirical evidence. Empirical evidence is information that verifies the truth, often regarded by courts as ‘highly credible.’ Could misapplied science be the cause of many unknown wrongful convictions? Recent and increasing court decisions would indicate that yes, misapplied science has caused innocent men and women to be wrongfully convicted.

Scientific evidence with long standing admissibility in criminal courts now heavily scrutinized is not specific to one certain type, either. Bite-mark comparisons, blood-splatter analysis and transfer DNA are just a few types of scientific evidence now being questioned. Experts and their application of data in issued reports often varies. Basically, one expert for the prosecution and one expert for the defense could issue conflicting analysis and testimony based upon the same data. So, who is right? How does a layperson make an informed decision based upon information they have little to no knowledge of?

Preventing a wrongful conviction is not the only factor causing concern. Taxpayer concern is also growing as large amounts of cash are being paid to those who were once wrongfully convicted due to the use of “Junk Science.” Preventing a wrongful conviction is always the best method, but how does that happen? How is a juror expected to know the difference between accurate and junk science when some courts allow the use of faulty science at trial? This is partially why the term, “beyond a reasonable doubt” is provided to jurors as a means of determining guilt or innocence.

All one needs to understand the impact anecdotal science has had on justice is to conduct a google search. Court cases being ruled on and reported verify the travesty of justice that plagues our “highest incarceration rate per-capita” United States. For those who have never been charged with a crime, you may shock yourself to learn that the status quo, “land of the free” is a facade. Anecdotal evidence should be highly criticized by all, especially a juror. Remember, you or a loved one could be the very person being judged one day!

System ignores science in the pursuit of convictions
–NBC, January 2019

How corruption in forensic science is harming the criminal justice system
–The Conversation, January 2019

One thing is certain; jurors should question everything during criminal trial proceedings.

The burden of proof does not fall on the defendant to prove their innocence; it is the government who must prove guilt – beyond a “reasonable” doubt. Just because a defendant looks, acts, talks or otherwise seems different than you, it doesn’t mean they are likely to be guilty. As a news organization that helps those who are innocent, the US~Observer believes that in addition to questioning the anecdotal/scientific evidence, one must question why a prosecution would withhold any evidence from a jury. If the government hides or redacts evidence, you must ask yourself why? If a juror’s job is to determine guilt, how can that be accomplished when they don’t weigh all of the evidence?

If you or anyone you know have been wrongfully charged or convicted with the use of Junk Science – contact the US~Observer. We can help. Email: editor@usobserver.com – 541-474-7885.