Josephine County, Oregon – Anybody who is considered to be a “biker” is a criminal!!! This is obviously what Josephine County District Attorney Steven Campbell believes given the fact that he was recently presented conclusive evidence that he had filed false criminal charges against three Illinois Valley bikers and he has continued the false prosecution. 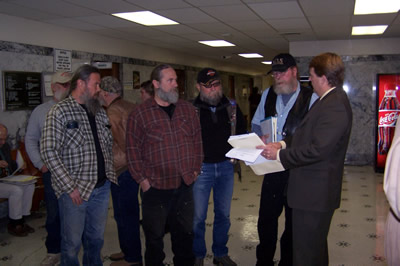 The three bikers, including Stan Strange, as well as a friend, going through legal paperwork with an attorney

In the afternoon of August 27, 2006, the three bikers were riding their motorcycles together between Cave Junction and Obrien, Oregon when, according to eye witnesses a yellow Mercedes came up behind them at a high rate of speed. The bikers were forced out of their lanes, two of them ending up on the shoulder of the highway. According to witnesses the Mercedes stopped behind them blocking Highway 199.

Strange left his motorcycle as witnesses watched from the windows of Mc Grews Restaurant. Strange approached the driver’s side of the car shaking his finger at the driver through the open window. Strange was obviously upset as the car had earlier nearly run him off the road. The driver, Eric Hill closed his window trapping Strange’s arm, he took off and dragged Strange down the road twenty feet before Strange could get his “bruised and bleeding” arm free. Strange immediately went to the Restaurant, asked the employees to call 911 and then an employee took Strange “into the kitchen area to clean and bandage his wounds.” One of the eye witnesses stated, “law enforcement officers never did arrive even though the riders waited more than three hours.” Two of the eye witnesses state in their affidavit that was handed to DA Campbell weeks ago that Strange only pointed his finger at Hill and that he did not hit him.

After waiting for hours at the Restaurant for police not to arrive Strange and friends went to his home where they had a beer and discussed the incredibly bazaar day they had shared. At 6:00 p.m. that evening the Oregon State Police (OSP) arrived at the door. Strange and Seybold both gave statements to the officer and expected him to file charges against Hill. The bikers were shocked when they received charges in the mail against themselves.

After the incident Hill continued on his way to the coast with two friends of his and was stopped by the California Highway Patrol (CHP) after crossing the CA/OR border. Hill had a bruise on his right cheek bone and claimed that Strange had assaulted him. Picture Strange at the driver’s door facing the left side of Hill’s face and then picture Strange hitting Hill high on his right cheek bone – one hell of a roundhouse wouldn’t you say? Actually this near impossible fete is simple a lie when compared to eye-witness testimony – testimony that gains the eye-witnesses nothing. Amazingly, Hill could have pulled off this false police report due to the fact that the cops bought his story were it not for the eye witnesses. Let’s not forget that neither the OSP nor the CHP were present during the incident and no follow-up investigation was preformed.

The real tragedy about this case is that this writer delivered 3 eye-witness affidavits to Josephine County District Attorney Stephen Campbell weeks ago and he has ignored them to date, forcing the innocent bikers to spend more money on their defense and wasting more tax-dollars that Campbell is claiming he is short of. Campbell has even separated the bikers and intends on having 3 trials if he is unable to force a plea-bargain out of the innocent men. This is unacceptable and it will be unacceptable for the Josephine County Commissioners to give Campbell the funding he is seeking if he continues his arrogant parade and practice of prosecuting highly questionable and false criminal cases. Our hopes for Campbell have been that he wouldn’t follow the same practice of filing false charges as did his corrupt predecessor DA Clay Johnson, however, our hopes are fading fast…

Foul Play Uncovered In the False Conviction of Kris Smith