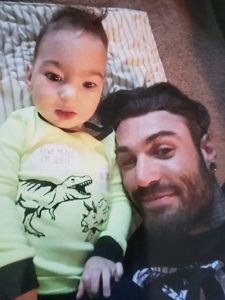 Macomb County, MI – After the death of his son which he attributed to a bad decision from a custody battle, Jonathan Vanderhagen lashed out publicly against Macomb County Circuit Court Judge Rachel Rancilio. Rancilio, who oversaw his son’s custody case, was partly responsible for the death according to Vanderhagen’s comments on Social Media. Saddened by the loss of his son, Mr. Vanderhagen flexed his First Amendment right to redress his grievances and took to posting on Facebook to help him heal and inform others. Soon after, he found himself arrested, locked up and facing trial.

Michigan Prosecutors assert Vanderhagen committed the crime of, “malicious use of a telecommunication device,” a misdemeanor charge. Vanderhagen claimed his public comments were a way to lash out at the family court judge who denied Vanderberg sole custody after the boy’s mother was not taking his son to important doctor appointments.

“My Son’s case 100% contradicts everything you claim to represent,” [Vanderhagen] wrote in one post on July 8, accompanied by photos of Rancilio hugging her father at a ceremony to join the Michigan governor’s task force on child abuse. “So wait Rachel you claim to be an advocate for ‘child abuse & neglect’ … very interesting … does my son Killian not fall into that category, does he not matter?!?!”

In several posts from early July, he shared some of the judge’s personal social media posts and suggested that Rancilio needed to be removed from her seat on the bench.

“I won’t stop till changes are made, people are held accountable, careers are ended, & these kids get the justice they deserve,” he wrote in one of his Facebook posts.

“At no time does he threaten harm or violence,” the police officer’s police report stated.

The harsh words left the judge upset. What Vanderhagen viewed as free speech, Rancilio deemed a threat. The 35-year-old Chesterfield Township, Mich., man was arrested for his Facebook posts in July, and spent almost two months in jail awaiting a trial. He then posted bail, and took to his keyboard, again criticizing the judge. He was arrested again and tried.

According to the Detroit Free Press, at trial, the judge stated on the witness stand, “I thought he was going to kill me and bury me after he was done.” She continued, “I was scared. I was afraid something bad was going to happen to myself or my children.”

Vanderhagen was acquitted at trial in mid-September. It took only 26 minutes for jurors to reach a not guilty verdict according to Vanderhagen’s attorney. After his acquittal, Vanderhagen told reporters, “I am thankful the jury could see the truth.” This case is a shining example of government overreach. As a public figure, especially a government employee, criticism can, and should be protected. At no time did Vanderhagen’s posts threaten violence against the judge. Kudos to the jurors for understanding that!

Editors Note: If you think your rights are protected, think again. Mr. Vanderhagen had to roll the dice with a jury for using his right to redress which is clearly protected by the First Amendment to the United States Constitution. Not only should Judge Rachel Rancilio be disbarred and removed from the bench, Assistant Prosecutor Elizabeth Rittinger should also be disbarred. Prosecutors are to seek justice which clearly did not happen. This case is nothing less than an extreme abuse of power and process. Both the Judge and the Prosecutor violated the law. The real problem – neither of them will be punished for doing so.

Innocent – Who Will Save Me?