“Give me control over a nation’s currency and I care not who makes its laws.” – Baron M.A. Rothschild
“Whoever controls the volume of money in any country is master of all its legislation and commerce.” – President James Garfield

Through my various columns I have been attempting to bring the people’s attention to the greatest swindle ever perpetrated upon the American people: the central bank dubbed “The Fed.” If you don’t understand the unconstitutional “Federal Reserve,” you need to because in 1913, the banking cartel took over this country with the worst yet to come.

Since 1913, the American people and this republic have been under assault by the international banking cartel and all their tentacles – it was one of the most destructive years in the history of this republic as far as Congress is concerned. They passed the unconstitutional Federal Reserve Act of 1913. Secretary of State, Philander Chase Knox, declared the non-ratified 16th Amendment ratified to make the American people believe there would now be a personal income tax. He committed fraud.

And, the same year, the final blow came with the announcement that the 17th Amendment was ratified when it clearly was not. It is absolutely imperative that Americans understand this rather dry subject because the privately owned central bank has been bankrupting this republic (we are NOT a democracy) since 1913 – and it will continue until you don’t have a dime left in your pocket. Always follow the money trail. Once you understand this money trail and the central bank, then you will know that all these dangerous alternative taxing schemes will only continue to feed the cancer instead of cure it.

In January 1946, American Affairs reprinted a paper delivered to the American Bar Association by Beardsley Ruml, Director of the Federal Reserve Bank of New York. The title of his paper was “Taxes for Revenue are Obsolete.” Ruml was, of course, right on point. The only reason the shadow government made sure the 16th Amendment was fraudulently ratified was to ensure the international banking cartel would have a mechanism to syphon off the wealth of the American people. The states did not want a direct income tax. Phil Hart, an Idaho state legislator, wrote his fully documented book, “Constitutional Income: Do you have any?” based on his collection of hundreds of historical documents which prove this position of the states back in 1913. Additionally, research and document gathering from states archives proves this to be accurate.

Without the central bank, there would be no need for a direct tax, sales tax, flat tax or any other tax. The real problem is that Congress continues to spend beyond those areas so clearly defined in Article 1, Section 8 of the U.S. Constitution and the people have allowed this plunder of the public treasury to go unchallenged for four reasons: (1) blind loyalty to their political party, (2) their Congress-critter brings home unconstitutional “bacon” to their district, (3) lack of knowledge about the hijacking of our monetary system and its relation to an income tax, (4) apathy.

Here’s a little apathy to digest: In 1900, there was no central bank in these United States of America. There was no direct income tax against we the people – our nation was flourishing and prosperous. As specified in the U.S. Constitution, only gold and silver was the lawful coin of the land. As clearly defined by those who birthed this republic, government services were paid for by excise taxes. In 1913, that fateful year, the national debt was $2.9 billion, the income tax was imposed via the fraudulent ratification of the 16th Amendment. Only a half-million Americans were required to pay the 2.7 percent tax (the income tax does not apply to domestic Americans).

In 1933, banking cartel lackey, FDR unlawfully confiscated gold belonging solely to Americans and devalued the dollar. The national debt began to mushroom under FDR’s Nazi style “New Deal.” Then, 1965 saw the debt level skyrocket to $320.9 billion. By 1968, “Federal” Reserve Notes (remember the definition of a note) were no longer redeemable for “lawful money,” so we must assume we’re all using “unlawful money,” which we are!

By the year 2000, the Democrats and Republicans in Congress had spent you into $1.67 trillion dollars worth of debt. As of December 2007, the ocean of unpayable debt was $9,168,352,339,338.57. Since the people’s treasury is over drawn more than NINE TRILLION “DOLLARS,” every check Congress continues to write is a hot one (you and I would go to jail); the interest on that debt is slapped onto your back and your children and grand children. For what? Not a single penny of your income tax dollars funds a single function of the federal government: “With two-thirds of everyone’s personal income taxes wasted or not collected, 100% of what is collected is absorbed solely by interest on the Federal Government contributions to transfer payments. In other words, all individual income tax revenues are gone before one nickel is spent on the services which taxpayers expect from their government.” President’s Private Sector Survey On Cost Control – A Report to The President (Reagan) January 15, 1984 – Available from the Congressional Research Service.

Where does all that money go? To pay down this massive debt created by Congress and unconstitutional robbing of the people’s purse for dues to the communist UN, the World Bank and hundreds of billions of dollars thrown around the world in foreign “aid” and unncessary wars.

As a direct result of the unconstitutional “Fed” supported by the best public servants money can buy in Congress since 1913, the debt has increased 232,605 percent. The cost of living has increased by roughly 1,951 percent since 1913. The day of reckoning is rapidly approaching and the train wreck the American people are going to experience will make 1929 look like a mere blip on the economic radar screen. I invite you to visit my web site and read “Why an income tax is not necessary to fund the federal government” and “The right argument on taxes.” Don’t fall for these alternative taxing schemes that will only continue to feed the cancer.

Devvy Kidd authored the booklets, “Why A Bankrupt America” and “Blind Loyalty”. She has been a guest more than 2,300 times on radio shows, run for Congress twice and is a highly sought after public speaker. To learn more about Devvy, please visit her website at www.devvy.com 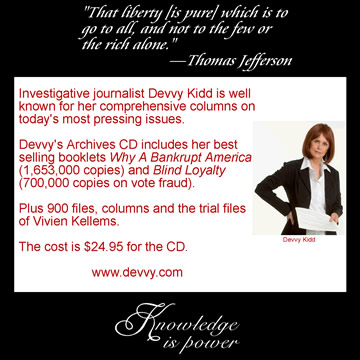 IRS: Justice for None

Time for a Charter Change?