The IRS is at it again, this time in Boston 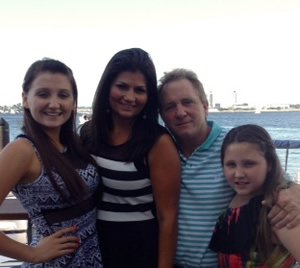 Boston, MA – 51 year old Thomas Curry of Boston started his family 19 years ago after he had established his business, and thus his ability to provide for them. Tom and his wife Stella had two beautiful daughters and Tom’s landscaping business continued to flourish due to his dedication and work ethic. They purchased a middle-class home and began saving for their daughter’s college and what they forecast to be a moderate retirement. They were succeeding with this effort due in large part to their very modest life-style. However, their hard work and their dreams were soon to be shattered.

Like many Americans, Tom Curry was patriotic and paid attention to government and the condition of his country, as opposed to sticking his head in the sands of apathy and selfishness. According to witnesses, Curry is a, “Christian man who worked hard, took excellent care of his family and often helped those in need.”

Tom Curry noticed as the years went on that he was working harder and harder, paying more and more in personal income taxes and that his financial condition was weakening. Like this writer, he didn’t agree with how his government squandered his tax dollars.

Tom Curry stated, “In the year 1997-1998, I was introduced to the works of Irwin Schiff and former IRS agents claiming that there wasn’t any law that made the US taxpayer liable to pay an income tax. I was in a real estate office at this time and one of the agents mother was an IRS employee. His name was Warren Cormier and he was the guy who introduced me to Irwin Schiff. This was very interesting to me so I contacted Irwin Schiff directly. I then purchased all of his books, tapes and began to read and study them. I referenced and cross referenced all of his claims and believed that what he was saying was 100 percent correct and that the income tax was indeed not mandatory, that it was voluntary… I attended many seminars that Mr. Schiff had put on.”

According to a US~Observer researcher, “Hundreds of thousands… of Americans no longer pay income taxes because of information contained in Irwin Schiff’s books.” This writer has spoken with Schiff in the past, just as I have spoken with nearly all so-called tax experts over the years who preach that the income tax is voluntary and we aren’t required to pay. These people are extremely persuasive, especially some of the ex-IRS employees who teach and promote this belief.

It didn’t take Tom Curry long to learn the government’s position on the income tax. He soon learned that he was in an uphill battle by not paying, so Tom started filing his now complicated returns after deciding he had no choice but to comply. He hired a number of different “professionals” to file his returns; however the Massachusetts State Department of Revenue (MDOR) and IRS employees informed him that his returns were fraudulent.

At this point these agencies simply took Curry’s gross incomes and taxed him on these amounts, excluding any write-offs. MDOR and the IRS have made the ludicrous claims that he owes anywhere from 4-7 million dollars in taxes.

Unable to even dream about paying these amounts and factually not owing them, Curry hired a tax-preparer named Nina Williams to work out his problems with the taxing agencies. After a good number of years and repeated failures on the part of Williams and others to straighten out his tax problems, Curry could see that he was stuck in “limbo” by the agencies. All of a sudden these abusive agencies started stripping Curry’s bank accounts, attaching his properties and forcing him to sign agreements that he disagreed with by threatening to take his driving privileges.

MDOR and the IRS finally went ballistic as they routinely do and on January 11, 2011, they sent numerous armed agents to the Curry residence, battering ram and all. They confiscated all of his business records and many of his personal possessions. Keep in mind, Tom Curry had not been charged with a crime at this point.

Curry then hired different attorneys who failed to help and finally, after many threats of criminal charges by the agencies, Tom hired an attorney from a substantial law firm in Boston to represent him. After paying this attorney approximately $75,000, Curry was informed that MDOR and the IRS were still going to prosecute him criminally and that he needed to accept their plea-bargain. This is the exact same scenario that countless Americans incur when they become at odds with the “Greatest Terrorist Organization” in history – the Internal Revenue Service. Curry was petrified at this point and decided to take his attorneys advice after having the hell scared out him with threats of many years in prison if he didn’t. By now Curry was well aware that MDOR and the IRS were working hand in hand with Assistant United States Attorney (AUSA) Victor Wild in Boston to bring him to his knees.

After many tears and hours of soul-searching, Tom Curry faced the fact that he had not intentionally committed any crimes – that he couldn’t lie and say he did something he didn’t do. He called his attorney and instructed him to withdraw the extorted plea agreement. He then fired the attorney, whose reported response was, “don’t do this to me.”

AUSA Victor Wild now ramps up his pressure on Curry, threatening him with a Grand Jury Indictment. Wild has continued his attempt to force Curry into a plea agreement and is currently preparing a Grand Jury in Boston to indict him. This will be an easy task for Victor Wild as he will be in total control of the Grand Jury, of the information they receive and the information that is withheld from them, however, there is now one huge difference – America will know exactly what he and the IRS is doing to the Curry family…

Not satisfied with over 12 years of destructive actions against Curry; not satisfied with forcing Curry to spend hundreds of thousands of dollars defending himself; not interested in allowing Curry to correct his returns, which Curry has attempted to do for the last 7-8 years, Wild has now threatened to arrest Curry’s wife, Stella, and charge her criminally, because she attempted to help Tom with his heavy work load for the past 4-5 years. Her work included billing customers and answering phone calls – she had nothing whatsoever to do with taxes. This is exactly what abusive people in government do when they are bent on destroying someone. This is exactly what the IRS teaming with prosecutors have done in a countless number of cases across America – charge the wife, in order to force the husband to plead guilty. What perversion, what injustice!

Tom Curry has now hired Lawyer Michael Minns to defend him and the US~Observer fully intends to let each and every person in Suffolk County, Massachusetts know the entire truth about the evil attacks by totally out-of-control government officials and tax agents against an exemplary Curry family. I know many fine, patriotic people from Boston and I know they are not going to appreciate the destruction of Tom and Stella Curry and their wonderful, young daughters.

The US~Observer commends Tom Curry for taking a stand against the abusive thieves at the Massachusetts Department of Revenue and the Internal Revenue Service. I commend this man for being reasonable, for realizing that he was given tax advice that might have been essentially correct, but was so wrong in real-life and application today. For these agencies and Assistant United States Attorney Victor Wild to attempt to ruin a great American and his wonderful family when he has made every attempt to be compliant and pay his taxes is unacceptable, in fact it is pure evil.

And, all Americans who hear that you aren’t legally required to pay the income tax, should run like hell away from this wrong, costly and dangerous advice. However well-intended Irwin Schiff and other tax-protest-evangelists are, they become scam-artists the moment they convince a somewhat trusting, real patriotic and maybe a bit naïve American like Tom Curry that he is not legally required to pay the personal income tax. Curry obviously is the victim in this tragic case.

We have been informed by legal sources in the Boston area that AUSA Victor Wild is a very abusive, unreasonable prosecutor who believes he can “Lord” over defendants and defense Attorneys. While the US~Observer fully intends to hold Wild responsible for the false and malicious Curry prosecution if it occurs, United States Attorney for the District of Massachusetts Carmen M. Ortiz will incur ultimate responsibility. I and our extensive readership ask that she look into this abusive case, get the absolute facts as I have, allow Tom Curry to pay his taxes and discontinue her offices attempt to indict the Currys.

If you are as incensed as I am, call US Prosecutor Victor Wild at 617-748-3100 and demand he settles this situation rather than prosecute a man so willing to be reasonable and pay his taxes…

Relief for a Wrongfully Convicted Man?