Vero Beach, FL – Fred Luongo, a minister and food bank owner of more than 20 years from Vero Beach, Florida has been “forced” to close down his non-profit food bank. Fearing for his life, Fred hasn’t even lived at his own home for over a year. His problems began in 2002 when his new neighbor opened up several businesses surrounding his home and non-profit food bank which are located on the same street. Since the arrival of Jeff Gomez, Fred’s neighbor, also the owner of Coast to Coast Landscaping among other businesses, life has been, “anything but normal”according to Fred. 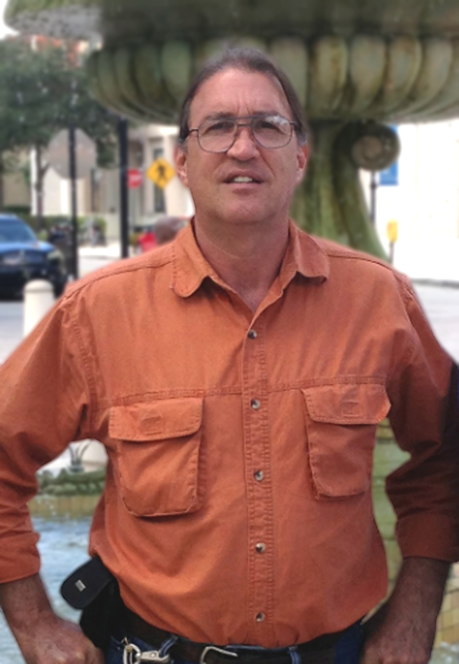 Fred continued, “The neighborly relationship started out like you’d expect, friendly and respectful. Mr. Gomez first approached me offering to trim some bushes between our businesses. He was a landscape guy, and I was okay with that. Everything seemed normal.”

It wasn’t long before problems ensued. Sprinklers from Mr. Gomez’s property were reportedly spraying onto Fred’s property, constantly hitting his food bank cargo truck. After addressing the issue in a respectful way, Fred thought the problem was resolved, yet “the sprinklers continued.”The continuous spraying of Fred’s truck caused rust, eventually requiring new paint. At this point, Fred wondered, “why?” Unable to resolve the problem peacefully, Fred contacted code-enforcement and filed a complaint.

After receiving the complaint, Mr. Gomez entered Fred’s food bank and confronted Fred. Gomez asked that Fred, “personally contact him with any future problems,” according to Fred. It wasn’t long after Fred noticed his truck was still being sprayed by Mr. Gomez’s sprinklers.

Fred approached Mr. Gomez, attempting to handle the problem like neighbors, but once he informed Gomez of the ongoing problem, like he was asked to do, Mr. Gomez allegedly responded, “I don’t have time for that.” Mr. Gomez then, “slammed his door, nearly severing my thumbnail,” Fred stated. 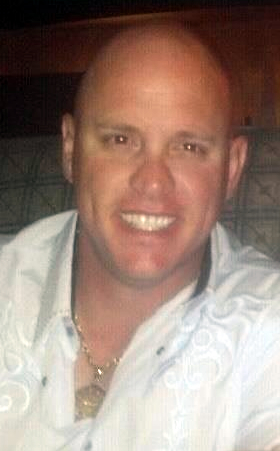 It was now obvious to Fred that Mr. Gomez, “wouldn’t peacefully resolve the problem.”

As time passed, Fred grew increasingly worried about Mr. Gomez’s businesses. It was reported that Gomez owned around 40 large work trucks that were constantly speeding down the dirt road they shared, creating large amounts of dust. Fred was also concerned for the safety of others as some of the truck driver’s consistently failed to make a “full stop” at the stop sign by Fred’s food bank. The drivers were also constantly honking their horn(s), creating more concerns.

Next, Fred noticed that his plants were, “being hacked with machete’s by Gomez’s employees.”

Looking back, Fred recalled a time when Mr. Gomez inquired about buying Fred’s property. Fred originally claimed that he wasn’t interested in selling. Fred responded to the request, “the food bank will stay open until I retire.”

Was Mr. Gomez purposely creating problems with Fred to force the sale of Fred’s property?

Fred finally offered to sell above market value. The price Fred wanted reflected the pay-off for the land along with the cost to reimburse contributors of the food bank. As Mr. Gomez rejected the offer, Fred remembered Gomez saying, “I’m gonna take it from you and there’s nothing you will be able to do about it.”

Soon after, Fred’s plants at his food bank started dying. Unable to determine why they were dying, Fred re-planted them. They died again. Fred re-planted again. They died. Eventually, Fred “discovered employees of Mr. Gomez were spraying my plants with what appeared to be poison.” Fred eventually contacted the EPA, resulting in an investigation that led to, “confirmation of poison present on his vegetation.”

During the time Fred’s plants were “being sprayed,” Fred suffered from several health complications before he found out about the “poison he was constantly touching on his plants.”

In 2007, prior to discovering the poison on his plants, Fred had a temperature of 104.1 on his birthday, but was not able to pin point the exact cause. Fred was hospitalized temporarily. He had fluid in his lungs, which confirmed an infection. Coupled with a high fever and wheezing while breathing, he was prescribed an antibiotic. Fred was bedridden for several more weeks. After the prescription ended, Fred was still ill, so he went to the emergency room three more times over a period of six or seven months. Fred also went to several other doctors in the meantime, trying to find out the exact cause of his illness. In total, Fred sought help from seven other doctors/specialists, but nothing was confirmed as the cause for his failing health. His appetite was extremely less than normal, urine was burning for four consecutive years, bloating on minimal amounts of meals, the more he consumed, the worse he felt. Fred began waking up with severe acid reflux, to the point he had to go to the emergency room again. Fred had never had any problems with acid reflux.

His eyesight was dramatically affected. He went from only using reading glasses to permanent glasses in a short period of time. Fred was finally diagnosed with blepharitis and conjunctivitis. His eyes were constantly burning, sensitive to light, sore, itchy and dry.

Was the spraying of his plants causing Fred’s health problems? Fred was continuously re-planting vegetation without knowing his plants were “contaminated with poison.” 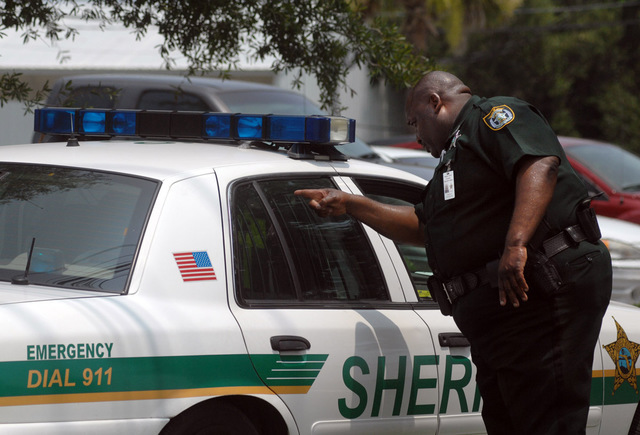 In early 2009, Fred’s plants were killed again. He contacted law enforcement to file a complaint for trespass and destruction of his property. Fred thought the only person(s) possibly responsible for the damage were Mr. Gomez, or his employees. Responding to the claim, Deputy Teddy Floyd arrived at Fred’s property and allegedly convinced Fred to drop the complaint. According to Fred, Deputy Floyd stated, “forgive the driveway (damage), forgive the plants, you’re a man of faith.” Fred reluctantly agreed with Deputy Floyd, giving Gomez the “benefit of the doubt.”

Shortly before the situation was resolved, Mr. Gomez arrived. Having had “no luck” dealing with Mr. Gomez, Fred began walking away to avoid any conflict. As Fred walked away, Deputy Floyd attempted convincing Fred to, “stay and fix the problem like men.” Fred continued to walk away. He stated that Mr. Gomez shouted, “that’s okay, my wife’s at the courthouse right now getting an injunction on you. You threatened my kid on Saturday morning!” According to Fred, he’s never threatened any child, furthermore, he’s, “never knowingly talked to Gomez’s kid.”

At this point, Fred immediately contacted his attorney and was advised to “lock my (Fred’s) door and stay in my house.” Sure enough, the next day, deputies knocked on Fred’s door and served him with a temporary injunction (restraining order). Fred claimed that Deputy Teddy Floyd lied on his report, which likely attributed towards the granted injunction.

The injunction was for “500 feet.” How could Fred work at his food bank, which was obviously much less than 500 ft. away? Eventually the injunction was modified to “50 feet,” but soon after, Fred wasn’t even willing to go back to work, in fear of being falsely arrested. According to Fred, false claims from, “flipping off Gomez,” to “drawing religious symbols in the dirt with a garden hose” have all resulted in him being wrongfully arrested.

Having back problems and a previous back surgery, his false arrest(s) have worsened his back problems. Fred stated he was, “hand-cuffed and put in a small chair by Deputy Henry Makaruo for eleven hours during Thanksgiving weekend (2009).” Fred alerted the deputy that he was hurt and tried to stand up, only to be told that if he, “kept getting up” he’d be, “bound in a wheelchair hand and foot and his (Fred’s) mouth would be gagged.” All of this was a direct result of, “false allegations and arrests” according to Fred.

In all, Fred has spent over 10 days in jail, for “five false arrests.” He’s lost his business and he hasn’t lived at his personal residence in fear of being wrongfully arrested. Multiple Indian River County Sheriff’s Deputies have “aided in Fred’s false arrests.” One deputy stated to Fred that, Mr. Gomez, “knows somebody at the Sheriff’s Office,” which allegedly was the reason why Fred was having numerous unresolved problems with Mr. Gomez. 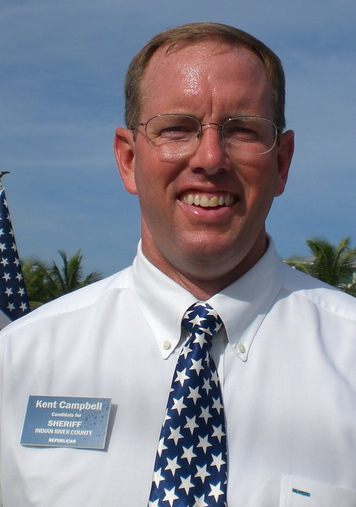 Fred recently went to trial for “violation of injunction” and, “resisting arrest.” The crime he allegedly committed – “flipping off Mr. Gomez.” Who arrested Fred for his alleged crime? Lieutenant Kent Campbell of the Indian River County Sheriff’s Department. What is the significance of Lt. Campbell arresting Fred? Kent Campbell is a Lieutenant. It’s not common for someone holding that title to make an arrest for violating an injunction order. You see, according to Lieutenant Kent Campbell, he is, “in charge of the entire county (Indian River) at night.” Lt. Campbell also stated he was responsible for 2 Sergeants, a K-9 unit, patrol, and 18 deputies. Lt. Campbell’s car wasn’t even equipped to transport criminals during Fred’s arrest. Even more troubling, there was, “no video or audio evidence gathered from Lt. Campbell’s car or person that supported Lt. Campbell’s claims.”

“All of our vehicles are equipped with dash cameras.” – IRC Sheriff Eric Flowers

During a conversation with Sergeant Eric Flowers, an Indian River County Sheriff in charge of media relations, he stated, “all of our vehicles are equipped with dash cameras. We have several deputies who are wearing body cameras in a trial phase.” He continued, “the policy is that if they’re (deputies) involved in an incident ah, you know, they, they are required to record it. It is part of the policy.”Going even further, Sergeant Flowers stated that, “dash cameras have been used by the (IRC Sheriff’s) department for over 11 years.”

Is Lt. Campbell exempt from department policy? Why wasn’t there any video footage from his person or his vehicle, after all, he was the arresting law enforcement officer. Shouldn’t he, the person “in charge of Indian River County” be setting the standard for other deputies?

Causing even more doubt, Lt. Campbell, “knows” Mr. Luongo. He knows him well enough to refer to him by his first name, “Fred.” Are they friends? Doubtful. Furthermore, Lt. Campbell’s wife works for Jeff Gomez. Yes, Lt. Campbell has a direct connection to Gomez, who made the complaint. According to Lt. Campbell, he is also, “friends”with Jeff Gomez. Conflict? Apparently not.

I found it interesting that Fred’s attorney, Jacob Noble asked Judge Joe Wild during Fred’s recent trial to give a particular instruction to the jurors while they deliberated. The particular instruction according to Judge Wilde, “the fact that the witness is employed in law enforcement does not mean that his testimony deserves more or less consideration.” It was obvious that Lt. Kent Campbell was seemingly biased, thus the need for that particular instruction. Judge Wild continued, “Okay. You are the first person to ask for that.” Not one other attorney, according to Judge Wild, has asked that testimony of law enforcement be given, “more or less consideration because of the job title.” Despite that instruction, Fred ended up convicted of, “resisting arrest without violence,” and, was acquitted of the injunction violation.

There are many issues with Fred’s conviction, which will be addressed during his appeal.

It’s concerning that the alleged police abuse leveled against Fred, and others alike, has increased distrust between law enforcement and the public. Fred Luongo had, “never been arrested in his entire life (44 years)” until Jeff Gomez moved next door. What is to come of Fred Luongo, a minister who ran a food bank for more than two decades while preaching the word of God to the homeless? This writer believes that Mr. Luongo has a bright future ahead. The US~Observer is actively investigating this case and will continue to keep the public informed!

Editor’s Note: Do you know Jeff Gomez? Are you a resident of Vero Beach, Florida? Do you know Deputy Teddy Floyd, or Lieutenant Kent Campbell? Have you been, or do you know others who have been abused in Indian River County? Call 541-474-7885 or send an email to editor@usobserver.com. 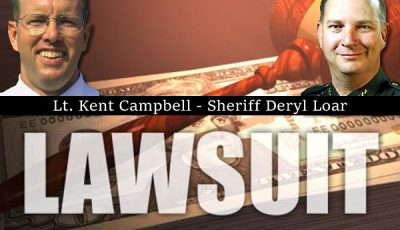