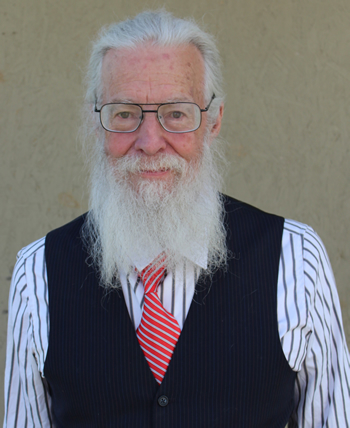 Land theft by government is a rapidly growing reality for many property owners across the country. “You didn’t pay property taxes,” poof, your land is taken. “Your home isn’t quite up to code, we’re (government) forcing the sale,” gone! “The property presents imminent threat to life or limb,” taken by government. Eminent Domain… These are just some of the examples used by government to strip a person’s right to private property. In Santa Cruz, CA. the right to NOT, “be safe and secure in your … houses…,” just might be the official land-theft blueprint for out of control administrative government agencies across the country. Essentially, the Fourth Amendment to the U.S. Constitution has been stripped by administrative government rules. Planning departments and code-enforcement officers (administrative government), backed by legal counsel, make their own rules, and take property with no accountability whatsoever. Roy Kaylor and others who own land in Santa Cruz can attest to that. Many Santa Cruz Co., CA. residents have horrific stories to tell. Their land is literally being stolen. 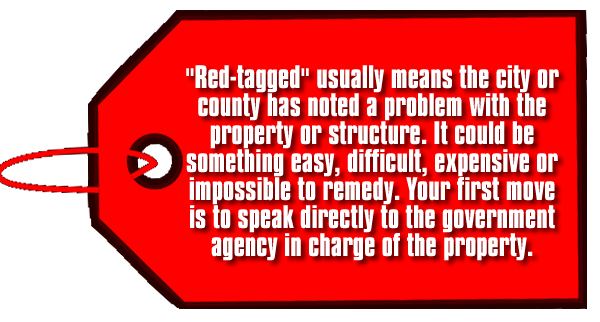 Roy Kaylor still (albeit barely) “owns” roughly 154 acres of prime timberland in Boulder Creek, located within Santa Cruz County. Large pulchritudinous Redwoods grow across his shaded mountain property. Kaylor, a 79-year-old gentleman, says he’s a, “Tree hugger” while describing his property. To a layperson, he may seem socially awkward. He’s reserved. At a glimpse, he looks rough around the edges. With a long beard, grey colored hair tied into a ponytail, it’s easy to judge him. Yet beneath the scruffy beard and all, he’s a soft-spoken and kind-hearted gentleman.

Literally, he’s more than just that. He’s a genius. His list of lifetime accomplishments could easily fill a large textbook. His inventions alone are breathtaking. According to sources, Roy invented the, “first prototype of the Toyota Prius. He’s been building many things throughout his life, yet energy efficient automobiles rank among the top. His inventions even created some havoc for Roy back in the 80’s. GMC allegedly had government agencies accost Roy out of spite when an electric car he’d built out-dragged a Corvette during a street race back in 1982. Roy invented and prototyped the main power supplies for the Voyager spacecrafts that have been working for over 40 years. He designed and prototyped a machine to test submarine-launched Polaris ICBMs to avoid blowing up at launch, which some historians have credited with the U.S. winning the Cold War. Another huge accomplishment for Roy was the Chevy Bolt. He, designed, prototyped and tested the motor controller used in the Chevy Bolt, ‘Motor Trends care of the year in 2017.’ 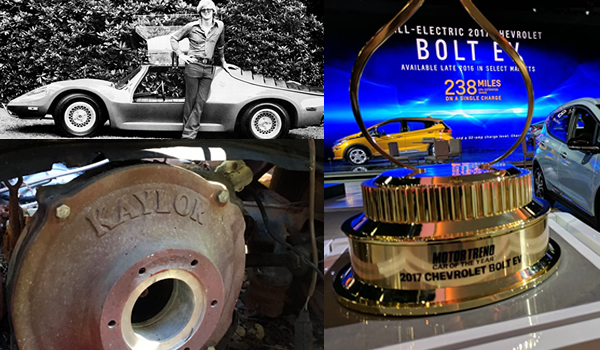 Roy Kaylor’s inventions have helped, “pioneer the automotive industry, among others.”

As his inventions produced income, he sought to buy property where he could work, live and store his prize belongings. Ending his search, Roy chose beautiful Santa Cruz County 34 years ago. Little did Roy know; his land wasn’t exactly his.

Roy Kaylor on his land full of tall redwoods.

Santa Cruz County reportedly wanted Roy to subdivide his property. Subdividing would create more tax lots, which in turn would create more tax revenue for the county. They even provided Roy with a proposal and developers to do just that. Roy had other plans. He wanted to preserve the land and the nine endangered species on the land. He planted 7,800 Redwood trees. He also wanted to build two large steel buildings to store many of his vehicles, along with other inventions. He was reportedly told by Tony Falcone at the county that he could build two, 2,400 square ft. steel buildings. Then, when he went to obtain the permits to do so, he was denied. Roy was told by Kevin Fitzpatrick, whose scope of work reportedly did not include permit approval, that he could not build – at least not what Roy wanted to build. Instead, Roy recalled Fitzpatrick, a then code-enforcement officer, saying, “you can only build one 600 sq. ft. building, and it must be completed within one year. Everything on the 150+ acre property must be stored inside it.” Fitzpatrick, who is now retired, was named by several others who shared similar negative experiences with Santa Cruz County. Being told, “no” by Fitzpatrick was a huge let down for Roy. Roy attempted to build on many other occasions, but the same answer always echoed… “Sorry, you can’t.”

Former and current county employees were contacted to understand why those in power would attempt to steal private property. Former County Administrative Officer Susan Mauriello was mentioned multiple times. One former County employee stated, “she was the ‘CEO,’ and was for the last 30 years. Even the supervisors wouldn’t do anything without talking to her first. She was the God of the county. If she didn’t like you or what you were doing, you didn’t get to do it.” Roy stated that while she worked for the county she was behind many of his problems. Hearing it from other sources helped to better understand Roy’s troubles. To some, Mauriello was hailed as an amazing woman. To many whom this writer spoke with, Mauriello truly embodied what was published about her in the Santa Cruz Sentinnel, albeit with a twist. She took the county coffers, “from $178 million to $700 million during her tenure…” The only real difference described was how Mauriello helped get the funds. Many called it, “theft.” It was nothing less than “Red-Tagging by deception,” to be specific.

“…Unless you can identify, fix or pay someone else to fix the issues associated with the red-tag, the property isn’t worth the hassle,” –author Laurie Brenner of the Nest

Without knowing what to do, Roy stored many personal belongings on his land and began looking for other property outside of the county. 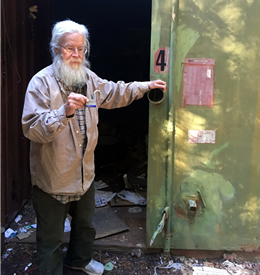 He installed intricate steel gates and fabricated locks to protect his property while he was gone. But that didn’t stop the thieves. Over the years, Roy stated his property was robbed and vandalized hundreds of times. Valuable cars were flipped over. Engines were literally ripped from his prized cars. “Over one-million dollars of valued property was destroyed or stolen,” according to Roy. Although the police never made one single arrest that led to a conviction in connection with the thefts, dozens of police reports remain on file at the local Sheriff’s office. As Roy recalled, the Sheriff’s Dept. lost records of over one-hundred theft reports when they moved offices.

Instead of catching the criminals, county code-enforcement officers started fining Roy for the property that was literally scattered across his land by the thieves and, “tweekers.” Roy increased his efforts to protect his property, but nothing worked due to his inability to build adequate storage facilities. The fines increased.

As the fines continued without just cause, he started fighting back. And the fight cost him dearly. To date, Roy has been fined, “over $40 Million,” which he has not paid. Coupled with attorney fees, and other costs, Roy’s out-of-pocket losses stretch closer to, “$1.5 million dollars,” according to Roy. Roy said each Red-Tag fine is “$5,000.00 per day,” and he’s had about, “100 Red-Tags issued to him.”

The costs for others involved with Santa Cruz County whom this writer talked to were insanely high as well. Chris Daly, another victim, “spent over $100k defending his property.” He, too, mentioned retired code-enforcement officer Kevin Fitzpatrick. As Daly recalled, “Fitzpatrick stonewalled me,” several times. When Daly’s property got red-tagged it also affected his taxes which is reportedly against the law. “I paid the tax fines to keep my property and they just put them back on the next year.” Another former county employee stated, “These fees that they’re charging, they aren’t legal, man. I’ve watched two RV parks get stolen (by the county). The county wanted the property, so they red-tagged them.” 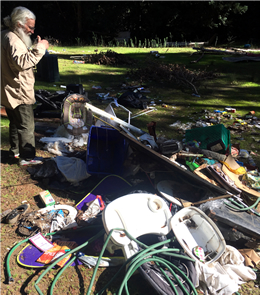 Roy Kaylor assessing the damage from vandals who steal from and dump trash on his property.

Another victim of the county, Lowell Webb, had similar accounts about the underhanded tactics used. He spent nearly ten years fighting the county.

Files upon files of people who’ve been unfairly targeted exist. Names of people who have been let off the hook (no permits or no fines) because of reported connections within the county also exist.

According to Roy, the County sued him under the wrong zoning as undeveloped rather than miscellaneous developed land.

Roy’s land has now been court-ordered to be sold against his will. He’s also been ordered by Judge John Gallagher to stay off his own land. The timber alone on his property is worth at least $500K according to professionals. The land without the timber is worth an estimated “$2 million, minimum.” The court is allegedly forcing the sale to a, “nonprofit group called Peninsula Open Space Trust (POST) for $1 million.” 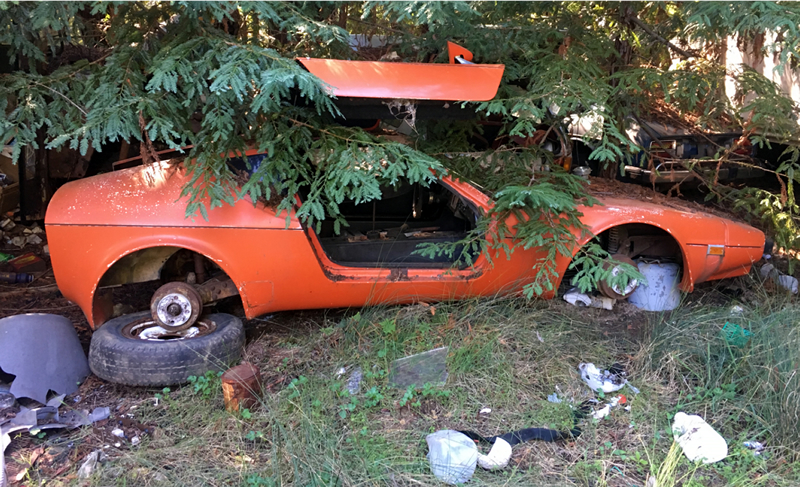 One of Roy’s stripped cars with trash scattered around it by vandals.

The actions against Roy by Santa Cruz County would drive most insane, yet Roy still maintains his composure. He wants to have the ability to build a place to store his belongings and inventions, without being constantly fined. If the property is forcibly sold, Roy wants to sue the county. Several others have already voiced their willingness to pursue a class action lawsuit against the county, which would likely be filed in federal court according to multiple sources.

Editor’s Note: Have your property rights been abused in Santa Cruz County? Do you need a voice? The US~Observer can help. Are your problems like Roy’s? Without coming together, you stand a great chance of losing. It’s time to hold abusive administrative government accountable. If those who have the power to undue the wrong against Roy Kaylor DO NOT DO SO, then they will be named in upcoming articles, along with more reported victims. That’s a promise the US~Observer will keep. Their friends, family, and peers will all know exactly what they’re doing, and to whom.

If you have any information regarding anyone named in this article, please contact the US~Observer at editor@usobserver.com, or by calling 541-474-7885.