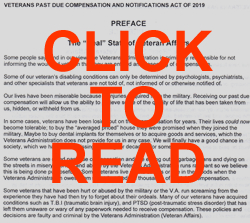 Veterans Past Due Compensation and Notifications Act

Veteran Patriots Foundation Inc. (VPFI), an organization that helps disabled Veterans, has drafted a proposed bill promoting past due injury compensation for Veterans. VPFI has sought support for the Bill’s acceptance from many prominent people. The bill, “Veterans Past Due Compensation and Notifications Act” has already gained much needed momentum.

One of VPFI’s founders, Robert Carrigan, also a Disabled Veteran, met with United States Representative Jimmy Panetta (D) out of California’s 20th District. Building momentum, Carrigan stated Panetta voiced support for the proposed legislation. Carrigan shared the proposed bill with Panetta during their face-to-face meeting. According to Carrigan, his time with Panetta ended with Panetta stating, “he would be in touch with Carrigan.”

VPFI is also seeking support from several other influential groups and politicians. Former dairy farmer turned politician, U.S. Representative Devin Nunes (R), is one name on the short list of VPFI’s future contacts. Atomic Veterans, any Veteran who was exposed to ionizing radiation while present in the site of a nuclear explosion during active duty, and Veterans who have been exposed while assigned  to clean up the radiation are also being asked to help promote VPFI’s proposed legislation.

The US~Observer Newspaper has also helped champion this cause. Edward Snook, founder of the US~Observer stated this legislation should have passed long ago. The proposed legislation deals with a current loophole that denies Veteran’s compensation for injuries starting when the injury occurred. Current rules only allow compensation for Veterans starting the following month after the day the Veteran filed for disability. Some vets don’t file disability claims because they never knew about their right to do so. According to Mr. Snook, “Disabilities for injured Veteran’s do not start when the Veteran filed for help, the disability started on the day the Veteran was injured.” VPFI has also raised questions about Veterans who have sustained Traumatic Brain Injuries (TBI). How can a Veteran who has sustained a brain injury know when to seek disability? In several cases, VPFI has found the VA, and the Branch of Service connected to the Veteran often failed to inform the Veteran of their right to seek disability. The proposed bill can be viewed in its entirety by searching online for, “Disabled Veteran’s Push New Legislation for Compensation,” or by clicking here.

VPFI’s Co-Founder, Robert Carrigan, says that if the group cannot get enough support from politicians, they plan to contact President Trump. Carrigan said he believes the POTUS can, “do what is necessary for disabled Veteran’s by Executive Order if necessary. This is too important of an issue for Trump to deny.”

VPFI is also seeking donations to help promote legislation so they may take care of Veterans who are currently not receiving adequate help. You can donate by visiting VPFI.org. You may also read the US~Observer’s initial report about VPFI Co-Founder, Robert Carrigan by clicking here. It is VERY important that you also contact your local Representatives and share this proposed legislation – it will take a strong effort to ensure every Vet in need receives the help they have been denied. Robert Carrigan was recently on the Veterans Take Charge radio program. Listen to his plea for help by visiting www.ksco.com. You may also contact Girard Bolton with the Enewetak Atoll Atomic Cleanup Veterans through their website Atomiccleanupvets.com. Thank you!