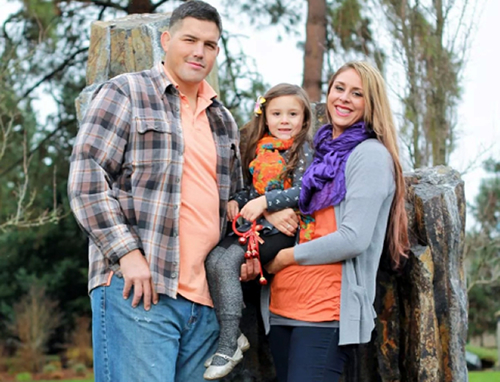 Grants Pass, OR. – For all of you who don’t know me already, my name is Jessica Morton. I have lived in Grants Pass, Oregon, most of my life; went to Redwood Elementary, South Middle School and then Grants Pass High School.

While at Grants Pass High, I was a 3 sport athlete. I participated in volleyball, basketball, and softball. Beyond sports, I was part of Leadership, Spanish Club, worked with the multi-handicapped/special education classrooms, and was active in community service, helping with youth programs and wrapping presents for the unfortunate. During my Junior year, our softball team went to the State Playoffs and this opened many doors for me. I went on to play summer ball and was seen by Bob Coolen, head coach at the University of Hawaii, Manoa. On the spot, he offered me a full-ride scholarship.

In 2003, I moved to Hawaii to fulfill my dream of playing Division I College Softball at the University of Hawaii. I traveled all over the United States with my softball team, winning the WAC in 2004 and 2005, playing in Regionals and Super Regionals – almost making it to the Division 1 Collegiate World Series.

As soon as I went to Hawaii I knew what I wanted study; I have always had a passion for helping children and working with special needs kids. I graduated from the University of Hawaii in 2008 with my BA in Psychology and a minor in Sociology and Business.

After graduating, I immediately started working for Hawaii Behavioral Heath and was considered a paraprofessional in my field of work. As such, I worked 1:1 with a boy who had autism and it was an incredibly rewarding experience, however, I soon had to make a tough decision when I found out that I was expecting my own little one. My fiancé’ and I decided that it was best we make the move back to Oregon.

In June of 2011, we moved back to good ol’ Grants Pass. Immediately upon arriving we had a interview set up at Southern Oregon Adolescent Treatment Center (SOASTC), now known as Kairos. My fiance and I were both hired and started June 16th, 2011. I worked there until July 23, 2014.

While working there I started as an on-call employee. In November 2011, I was encouraged by many staff and the Program Manager to apply for a supervisor position that was open. I ended up getting the position. While being supervisor I became a Tier II Trainer and helped train staff members in Collaborative Problem Solving (CPS).

On May 6th, 2014, I was voted by co-workers for “Employee of the Month” for the 4th time since being hired.

On Friday, May 9th, 2014, I was asked by the Program Manager to attend a fundraiser for Kairos’ “Celebration of Hope”.

On Saturday, May 10th, 2014, the Admin-on-call contacted me and informed me that I was being put on administrative leave, which I would later find out was because of an allegation made by one of our troubled residents.

It is my opinion that The False Accuser, upon coming to Kairos, was an aggressive, angry boy. He was easily upset. His way of showing that he was tough was punching walls, doors, fences and other objects. He did this often when he was feeling insecure, and/or not getting attention.

While getting to know him it became apparent that he was a very insecure boy with attachment issues. He always talked about his mother and how he wished she would be there for him. He really struggled with his mother issues and projected his feelings and emotions about his mom on both female staff and residents. He soon started acting out on his sexual urges after being in Oregon Youth Authority (OYA) for a few years. Soon he began pushing boundaries with female residents and parameters had to be put in place in his Behavioral Support Plan (BSP), which is documented.

He struggled, on a day-to-day basis, with boundaries set for both staff and residents. He would stand too close, try to turn a side hug into a full hug, hug for too long, poke, touch hair, long awkward hand-shakes, try to hold hands, and would continuously be getting into your personal space. Everyday he was talked to about his boundaries. Plan B conversations (addressing/documenting his behaviors) were happening with many of the staff.

He often glorified his addiction to meth and his criminal history surrounding that time in his life. He talked about stealing from his family and friends, hurting family and friends, and not having any remorse for those actions. He told his stories several times a day with staff and peers. He, while at the facility, helped a peer sneak in meth and they were able to use meth together. He was not removed from Kairos for doing this. According to other staff and the clinical team, he is a pathological liar and sociopath, and lied on a daily basis about random things. Example: He went to the therapist and asked what would happen if he had a phone; therapist tells him that it would just need to be locked up offline. Therapist comes to me and says to keep an eye out because she thinks he has a phone. When I confronted him he claimed, “I just wanted to see what you guys would do.” He lied about sexual encounters that he claimed to have had with other female residents. He lied about things he did on his day visits.

He engaged in several attention seeking behaviors trying to get attention from me. Example: Kairos was hosting a Prom for residents, I had arranged for someone to come in and do the girls nails. I was with the girls having girl time and he became very upset wanting to have a check-in. I informed him that there were other staff that could help him. He refused to check in with anyone else. He then decided to AWOP, (Away with-out permission) he hopped the fence knowing that as supervisor I would have to be the one to assess the situation. He also self-harmed, by cutting himself, punching walls, throwing objects, again knowing I would be the one assessing the situation. After his repeated inappropriate advances toward myself and other female staff and peers he became more aggressive, lying and complaining about me to staff. He asked peers about me and how I looked under my clothes.

Shortly after this, he made a false claim about me to staff, which they were required to share with law enforcement. I was subsequently fired from Kairos, with NO support from my employer to denounce the false claims against me. Soon after, I began being harassed by the Grants Pass Police Department. They obtained a warrant, issued by Judge Lindy Baker and forced me to strip naked, so they could photograph my un-clothed body. There has been no, nor will there be any admission on my part, only adamant denial. There were no witnesses to the alleged sexual contact he claimed. There was no DNA. There was no evidence whatsoever other than an allegation from an alleged diagnosed schizophrenic/bipolar seventeen year old, who had reportedly abused meth since the age of 13, and the hearsay he offered.

Almost one year passed before I was arrested on April 30, 2015. I am now facing six criminal counts, 5 misdemeanors and 1 felony. I posted bail for $2,000.00 that I had to borrow since I am not employed. The local media showed my mug shot on television, claiming The False Accuser was a “victim,” basically branding me a sexual predator without any of the facts of my case, other than what the police and the district attorney delivered to them. Not one person from the local media attempted to get my side of the story before branding me a criminal sexual predator for all of my friends, family, peers and others to see on live television, newspapers and radio.

Over the last year, I have not only suffered the loss of my job and career, my personal and family life has taken a huge toll from these wrongful allegations, causing my family and I a tremendous amount of stress and suffering.

Recently, Kairos has fired several other employees, two of whom have been charged with crimes, and these incidents have been highly publicized within our community. Interestingly enough, I was indicted just a couple weeks after those cases were so prominently displayed to the public, even though the investigation into my false charges began almost an entire year ago. This has left me wondering if the ‘warmed’ public sentiment motivated the prosecutor to pursue my case, making it politically motivated in a time when police and prosecutors are trying to pass a levy and get more funding from taxpayers. Fortunately for me in my case, the majority of people are seeing these charges for what they really are, baseless allegations made by a desperate young man to get attention, and pursued by a new prosecutor who is looking to make a name for himself by prosecuting Kairos employees. While I can not speak on the other Kairos employees’ innocence or guilt, I can, without any doubt, declare my own innocence. In fact, I am shouting it for the world to hear!

I’m deeply saddened by the lack of investigative skills by the Grants Pass Police Department, and furthermore, I am extremely hurt by the explicit lack of professionalism displayed by Kairos, and their complete disregard and lack of support for their employees.

This next chapter in my life will assuredly be one of the costliest, financially. Attorneys, court fees, expert witnesses, and who knows what else, are all looming in the short term. Instead of being innocent until proven guilty, today you are guilty until you can pay to prove your innocence, and my innocence is going to cost my family and I much more than we have. So, I am humbly asking for your help. Please donate $1, or any amount you wish, to help alleviate some of the costs. Anything given is greatly appreciated. With your help, I plan on being vindicated and declared, for all to know, the true victim of these false charges.