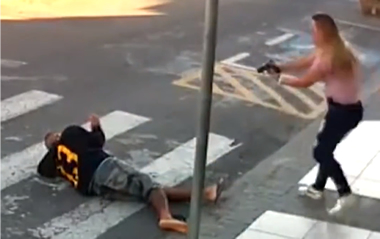 They say a picture is worth a thousand words. However, it really is just a snapshot of a point in time with a great amount of context being lost. Take for example this picture (to the right) of a woman holding a gun on a man who is pleading for his life. You can deduce from the picture that she has either shot the man or is about to shoot him. If the man died, would you be able to convict her for murder based on this picture? Or, perhaps you’d simply side with your gender bias and assume the man had done something deserving and therefore she is justified in killing him. Either way, you don’t really have the “whole picture” to make a clear and educated determination. Now, can you imagine basing a criminal investigation and subsequent conviction off one picture? That is, however, exactly what happens during many criminal investigations. More often than not – especially in homicide cases – these investigations focus solely on the moment in time that the crime took place, or when the person was killed. Many homicide investigations ignore the possibility of context coming from previous events leading up to the moment of an individual’s death, instead relying on witnesses at the scene to place the suspect as the perpetrator of murder. With most prosecutors fighting tooth and nail to convict an individual based solely on this incomplete “set of facts,” they, too, ignore contextual evidence, which increases the chance for wrongful convictions. Prosecutors really are relying on law enforcement’s “snapshot” investigation, and nothing could be a better example than Okanogan County, Washington’s Vehicular Homicide case against James Faire. 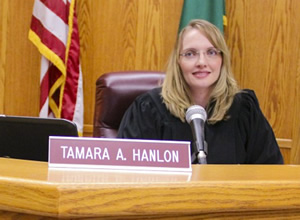 Faire, whose charges have been dismissed with prejudice by the judge overseeing his case, who cited “truly egregious cases of … misconduct,” is facing an appeal of the dismissal ruling. Arian Noma, the newly elected Okanogan County Prosecutor who had already publicly stated, “The Faire case is an example of prosecutorial misconduct, incompetence at best,” decided to try and avoid any appearance of impropriety. Noma sent the potential motion to prosecutor Tamara Hanlon of Yakima County for consideration. What Hanlon was supposed to do was look over the judge’s ruling and see if there was a matter of law that warranted an appeal. Instead, through a response to a motion filed by Faire’s attorney Stephen Pidgeon, Hanlon makes a much more disturbing assertion:

“The criminal charges against Faire were improperly dismissed by the trial court. By bringing this appeal, the State seeks a reversal of the trial court’s decision that dismissed the case. Such a reversal would place the case back on the trial track. A positive outcome for the State would mean Faire is then tried, convicted, and sentenced for the crimes he was charged with. The State’s purpose in appealing is to correct an erroneous trial court decision so that the ends of justice may be served.”

It is this kind of prosecutorial bias, overreach and reliance on law enforcement’s (and the previous prosecution’s) “snapshot” investigation that truly shows our justice system to be corrupt. If Hanlon was to take her job as prescribed, she shouldn’t be making any assertion as to what a “positive outcome for the State” would be – other than taking issue with the judge’s legal ruling. And frankly, it is not within her purview to say that if Faire was convicted, justice would be served, because it would be one of the most heinous acts of injustice, and it would fall right into her lap and follow her to the end of her days. 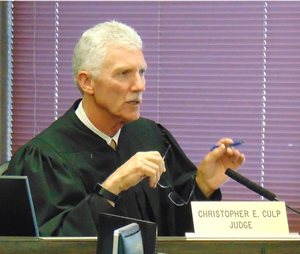 So, who knows the case better and if it should be dismissed? The judge who oversaw every aspect of the case, or Hanlon, a prosecutor with limited knowledge who obviously has an agenda?

Perhaps Hanlon should consult her copy of the American Bar Association’s Criminal Justice Standards for the Prosecution Function and come to grips that she should “act with integrity and balanced judgment.” Furthermore, she might want to realize she “serves the public and not any particular government agency, law enforcement officer or unit, witness or victim.” Most of all, Hanlon needs to remember that her primary duty as “prosecutor is to seek justice within the bounds of the law, not merely to convict.”

Had Hanlon looked into the contextual evidence that shows there was a conspiracy to entrap and kidnap James Faire that was taking place, she would have seen that Faire’s actions, while he was being violently, physically assaulted were obviously defensive in nature, and accidental when it came to the death of Debra Long. We have published extensively on the events leading up to the conflict that sadly ended Long’s life – our articles may be found online at usobserver.com. Furthermore, with all the State’s witnesses admitting Faire was the one being assaulted, and the established fact that the State’s witnesses had filed a false police report wherein they lied about Faire in order to harm him, it should be obvious that culpability for Long’s death rests exclusively on the shoulders of the individual who was engaging in the felonious act of assault and attempted kidnapping, not James Faire. In fact, Washington State law has already determined that such behavior warrants a charge of Murder in the First Degree:

Prosecutor Hanlon and her boss, Yakima’s Elected Prosecutor Joseph Brusic, were emailed a copy of this article. Hanlon was given the opportunity to respond, as well as answer several other questions that could have relevance with this case as it moves forward. Brusic respectfully responded writing, “we cannot professionally and ethically answer your questions due to the ongoing litigation and current appeal in the Court of Appeals.”

The questions I felt Hanlon needed to answer:

“…have [you] ever found a case as a prosecutor that you have not sided with law enforcement or a fellow prosecutor when it came to continuing a prosecution against an individual? What was the case(s)?

“Have you had any personal or close professional relationship with Kreg or Karl Sloan? What about Brandon Platter?”

The answers could be quite telling and we are well on our way to answering them for ourselves – stay tuned.

However, Prosecutor Brusic brought up an interesting point, there is litigation ongoing. James Faire’s $30-million tort claim and pending civil rights lawsuit against Okanogan County, which I am sure Yakima County just waded into with Hanlon’s unsolicited and completely contrary-to-established-facts proclamation of Faire’s guilt. Hanlon should know better. Guilt is to be determined by a jury, until which point ALL should be considered innocent, especially those like James Faire who really are innocent of what they are charged with.

One thing is certain, James Faire deserves justice for being falsely prosecuted and dogged for these four long years. The interest of the public is justice for James Faire, not some prosecutor’s backward moral notion that they must seek to convict an individual simply because they were charged, and the investigation’s “snapshot” paints a pretty picture.

As Arian Noma once said, “A prosecutor must think, investigate, and learn the events and facts before charging anything – something that obviously didn’t take place in Faire’s case…”

It is a shame that he, too, lost sight of the whole picture. But, maybe it’s not too late for him to act. There can be no impropriety if one is acting for the sake of justice. As the above referenced Standards for the Prosecution Function states, “A prosecutor’s office should not … maintain charges if it believes the defendant is innocent, no matter what the state of the evidence.”

It’s time to end this chain of abuses against James Faire and drop this perfect picture of injustice.

Editor’s Note: The woman in the picture at the beginning of this article is an off duty Brazilian policewoman named Katia da Silva Sastre. She witnessed the man, who had been armed, violently assault and attempt to rob a group of women outside of a school. She was forced to use her weapon to protect them from harm and fatally wounded the assailant.

In the James Faire Case, we can understand why Okanogan County Prosecutor Arian Noma passed the appeal issue to another jurisdiction. What we can’t understand is why Noma hasn’t charged the chain-wielding madman, George Abrantes with Murder, as he had violently and feloniously attacked James Faire, causing the death of Debra Long.

Anyone with information – personal or otherwise – on Tamara Hanlon, and/or regarding prosecutorial abuses in either Okanogan County or Yakima County is asked to please contact the US~Observer at 541-474-7885 or by emailing editor@usobserver.com.