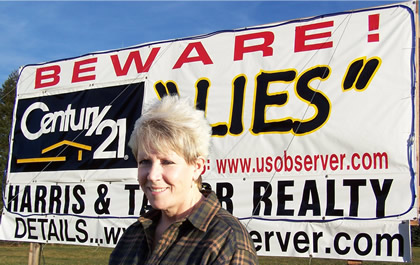 Gold Hill, Oregon – Linda Acosta and her late husband Bob purchased their home in November of 2001. They were assured by their real estate agent Jeannie Moore that their property was backed by Bureau of Land Management (BLM) property. This supposed fact gave them the assurance no one would be building behind them. This is what they wanted and believed it was what they purchased until they found out, after spending considerable time and money on the property that Harris and Taylor Century 21 Reality had lied to them. Their property actually was backed by private land.

In October of 2005, Linda Acosta was contacted by reporter Howard Huntington of the Daily Courier. Huntington wanted to do a story on the sign Acosta had placed on her property and the reasons for the sign. The entire story had already been covered months prior by the US~Observer, so why did the Courier need to do an article. A prudent guess would be that someone from the real estate company contacted someone at the Courier to do damage control for them. Huntington’s article was published by the Courier on November 4, 2005 and as expected it contains numerous lies, making the real estate company look much better than they should.

First off Huntington gives the sale price of $395,000 and states that the “sale included two adjacent, three-bedroom homes.” There is only one three bedroom home. The other is a two bedroom apartment that was built over an existing barn/garage. Huntington’s intentions are all too obvious.

Huntington’s article continues, “Century 21’s attorney, Mark Clarke of Medford, said in a letter to the Daily Courier that the sale price was consistent with the local market.” What in the world does this statement have to do with anything? The Acosta’s purchased a property that had been on the market for a long time and it was sold to them as backing up to BLM land. They had poured well over $125,000 into the property when they discovered they hadn’t purchased what they were sold. Ms. Acosta has continued improving the property to this very day simply because she has no other choice. After the death of her husband Robert Acosta, Linda is now on her own and in no shape for the enormous task of finding another property, moving and having to start all over again. And what in the world is attorney Mark Clarke doing writing a letter to the Courier when his Oregon State Bar rules state that he cannot use the media to enhance a case. So much for rules… The lies continue… “Another Century 21 attorney, Arne Cherkoss of Medford denied all of Acosta’s allegations. He said Acosta did not use the procedures in her contract for resolving disputes and rejected Century 21’s offer to deed to her a strip of land connecting her property with the BLM’s. No offer has ever been made to Ms. Acosta and apparently Ms. Acosta has followed proper procedures because the issue has already been ruled on in court. In fact, Century 21 conveniently came up with paperwork after a Medford judge had ruled against them. When they asked the judge to re-consider based on the “newly discovered document” the judge denied them and stated that he wouldn’t rule on possible fraud because he didn’t have to.

Huntington should donate some time to the US~Observer in exchange for us teaching him to properly investigate and print facts as opposed to lies. As for Ms. Acosta she recently informed us that she intends to keep her sign up until Harris & Taylor Century 21 Real Estate Company is held accountable. Acosta stated, “if this sign isn’t large enough I’ll purchase one that is.” As for threats from the company of them filing a law suit against Ms. Acosta for posting the sign she says she is quite ready.

Since the Observer began publishing articles on the Acosta case we have had numerous horror stories reported by people who claim to have been lied to by Harris & Taylor Century 21 Real Estate Company. The following is one such case.

A New Case of Severe Abuse

In December of 2004, David and Paula Knobloch purchased their home on Cloverlawn Drive in Grants Pass, Oregon. Harris & Taylor Century 21 Real Estate was the company selling the property and Toni Epperson was their agent.

Paula Knobloch, who had just been diagnosed with cancer, would soon experience problems nearly equaling her bout with the cancer.

On the weekend the family moved into their home they ran out of water and sediment began coming through the pipes in the house. They immediately called their realtor and according to the Knoblochs they were told that it was probably a temporary problem from the pump etc., not being used. The water did return, however they still ran out of it in short order over the next few weeks. They then contacted a local water service and were informed that they should have the well tested and they should also test the water. Paula had been sick during her time at the new (to them) home and had attributed the illness to her cancer treatments. As soon as the water test results came in the family was informed that the well was contaminated and that it was producing less than two gallons of water per-minute. They started drinking bottled water and immediately Paula started feeling better. Her doctor later informed her that she was fortunate to have found the problem when she did. As for the low gallons-per-minute issue the Knoblochs state that they were told by both Toni Epperson and the sellers that the well produced at least 5 gallons-per-minute or better.

The Knoblochs had no idea that their problems were only beginning. They found carpenter ants, yet they were informed on a walk-through prior to closing that this was normal to have some ants come into a home once it was vacant. Their realtor assured them by stating in front of several witnesses that there had been a pest inspection on the house.

Next, the Knoblochs began having septic and electrical problems and they recently found that there was flooding going on in a portion of the basement when they had a heat pump system installed. As soon as the heat pump began working Paula once again became ill and it was soon discovered that there was mold in the basement that was caused by the moisture.

When the problems with the septic continued the Knoblochs decided to attempt to find the company that had worked on the system for the previous owners. They located the company and were informed that the previous owners were told they would need a new system before long. Like all the other severe problems this was never disclosed to the Knoblochs.

Just like the Acostas, the Knoblochs inform us that they were either ignored or lied to when they attempted to get Harris & Taylor Reality to address their problems. As a result they are currently looking for legal counsel to represent them against the obviously unethical realtors.

Editor’s Note: Don’t miss our next edition wherein we will address this tragedy in more detail. Anyone having problems with Harris & Taylor Real Estate is urged to contact Edward Snook at 541-474-7885.

If you or anyone you know are being wronged by a real estate company – contact the US~Observer. We can help! Email: editor@usobserver.com – 541-474-7885. 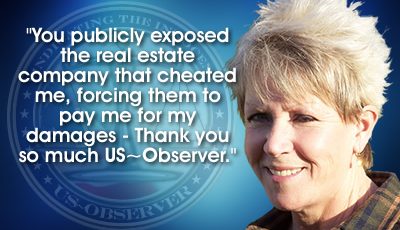