Okanogan County, WA – The dismissal of James Faire’s charges by Okanogan County Superior Court Judge Christopher Culp has been challenged by Okanogan County Prosecutor Branden Platter. Platter filed a notice of appeal on August 9th, and the continued false prosecution comes with a hefty price tag that taxpayers are on the hook for.

US~Observer Editor-in-Chief, Edward Snook commented on the news, “As I stated when this was dismissed, appealing this case is the only option Branden Platter had in order to try and save his political career, especially after such a dismal showing in the primary.” Snook continued, “The citizens of Okanogan County need to be fully aware that although Platter tried to cover his backside in this corruption by stressing that he wasn’t involved in the case during the Brady violations, which prompted the dismissal, he had all of the evidence right in front of him for over a year after he took over for Sloan. Platter is just as guilty as Karl Sloan, in fact, in some respects he is more responsible than Karl Sloan.” 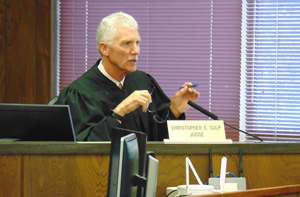 The order dismissing Faire’s case “with prejudice” was filed July 16th with Judge Culp citing, “egregious breaches of constitutionally protected rights of the defendant by the prosecution and for continued acts of prosecutorial misconduct.” His ruling came after 3 years of hearings and interviews wherein it was discovered that James and Angela Faire had permission to be on Richard Finegold’s Tonasket property and had not been squatting; that Richard Finegold, along with others conspired to file a false police report against James and Angela; and that Detective Kreg Sloan along with his brother, ex-prosecutor Karl Sloan had conspired to give critical evidence back to a witness without ensuring the extracted data’s integrity or otherwise preserving it in any way for the defense’s use. It was the latter that was so heavily weighed by Judge Culp.

Detective Kreg Sloan took a cell phone that was reported to have filmed the incident and, according to his testimony, downloaded the information onto his personal work laptop – not the county’s server which is where he previously told a defense investigator he had deposited the information. After conspiring with his prosecutor brother, he rushed to give the phone back within 1 day of seeking a warrant for the information. Kreg Sloan testified that it would be months before he looked at any of the data and that when he did all of it had been wiped-out due to a virus of suspected Russian origin. It was three years before he told the prosecution that the evidence was destroyed.

This alone sows the seeds of reasonable doubt. Not only do the prosecution’s witnesses claim there were text messages on the phone that show communication between one, if not more, of the conspirator’s, there is enough circumstantial evidence to suggest the prosecution is engaging in an attempted cover-up to protect former prosecutor Karl Sloan and current prosecutor Branden Platter’s careers. 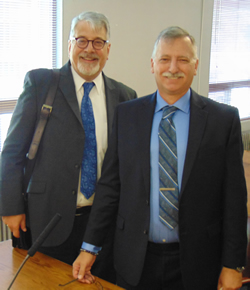 “I was attacked, and I needed to protect Angela and myself which is how this all started,” James recalled while surmising what is next, “and now we are being attacked all over again by a system that I thought was supposed to be about truth and justice. The evidence of my innocence has been there from the beginning. But, because of a rush to judgment and county officials making public claims they have consistently violated me, my rights and, I feel, the law to cover up for a group that has since admitted to conspiring to frame me and detain me – a group that physically attacked my wife and I.” James went on addressing the appeal directly, “I’m not afraid of this going to court should the appeal be granted, I have the truth on my side. I know a jury will see that defending myself by trying to get away was the only and best option available to me.”

James Faire’s attorney Stephen Pidgeon points to critical facts that show the coverup saying, “On June 23, 2015, at 2:49 p.m., Kreg Sloan received a search warrant to search ‘all digital data on [Abrantes’] phone including but not limited to call logs, phone contact lists, text messages, digital images or videos, instant message, location data or other data pertaining to the events…’ If Kreg Sloan found, say, a video corroborating the state’s version of events, such a video would have amounted to the immediate conviction of James Faire. Yet, the state must have found something else, because the following morning, on June 24, 2015 at 8:37 a.m., Kreg Sloan contacted his brother Karl Sloan, and got an unlawful instruction from him to dispose of the phone, and by 8:50 a.m., Kreg Sloan FED-EXed the phone that was the subject of the search warrant back to chain-wielder George Abrantes, notwithstanding the order of the court the day before which stipulated the sheriff’s department and prosecution will ‘Safely keep property seized.’”

No law enforcement agency gets rid of evidentiary property this quickly unless it is damning to their case. The video and or text messages that were on the phone when Kreg Sloan opened it must have proven that James Faire acted out of Self Defense. 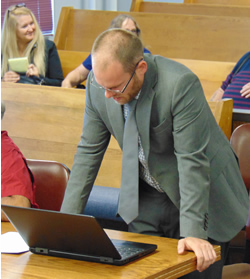 Branden Platter has made several statements to the media saying he thinks a jury deserves to hear this case. Perhaps it’s because he thinks the jury would never get to hear just how badly the Okanogan justice system, himself included, has bungled this case by conducting an incomplete and inept investigation, ignoring witness interviews, losing and/or potentially destroying exculpatory evidence, and ignoring mountains of other evidence that shows the true perpetrators are still at large. Perhaps he thinks the corruption that existed between the Sloan brothers won’t find its way to the ears of the jury. Or, maybe, his sense of justice, like far too many prosecutors, is tied to the charging instruments instead of the facts as they are revealed. 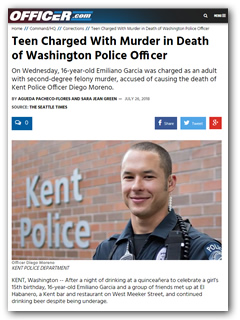 Felony Murder as defined by Washington State Law can occur when a person dies as a result of someone committing a felony crime. This article is an example of such a case. In James Faire’s case, he was forced to flee from the felonious assault that was committed upon him by George Abrantes. Had George Abrantes not willfully and violently attacked the Faires, Debra Long would be alive today. Charging James Faire goes against state law.

The US~Observer and Attorney Pidgeon both wholeheartedly agree that this case should be heard by a jury because the facts are on James Faire’s side and the truth deserves to be revealed. But what is the cost? For James and Angela, it’s been the immense and debilitating pain and suffering caused by over 3 years of being falsely prosecuted. For the taxpayers, it means hundreds of thousands of your tax dollars thrown at a prosecution that one man, Branden Platter, is compelled to continue in his attempt to keep the facts of his own crimes hidden – at least until after the upcoming election.

Editor’s Note: Some might think that Okanogan County Prosecutor Branden Platter could not be committing crimes, that he is responsible for seeking justice. It is the exact opposite. The US~Observer has publicly established that there is more than enough evidence to prove he is committing the crime of Obstruction of Justice by covering-up for George Abrantes’ factually proven crimes of Felony Assault on and the Attempted Murder of James Faire. Further, Platter has absolute evidence in the form of direct statements by Richard Finegold that he filed the false police report that caused the Okanogan County Sheriff’s Office’s to become involved in the horrible conspiracy against James and Angela Faire. These are simply two of the numerous crimes that Prosecutor Platter has committed!

Additionally, Faire’s attorney Stephen Pidgeon believes that the evidence currently before the prosecutor’s office not only establishes probable cause for the arrest of George Abrantes and the others involved but would easily lead to the conviction of Abrantes for First Degree Felony Murder. When confronted by Pidgeon and asked if he’d be arrested if he walked out to Platter’s car with Abrantes’ chain and threw a blow to smash his driver’s side window, with Platter in the vehicle, Platter responded with, “I refuse to answer that.” He knows he would prosecute, so why hasn’t he in Faire’s case?

The good people of Okanogan County should think long and hard before voting in the upcoming general election for County Prosecutor. In our opinion, the BEST CHOICE is NOT Branden Platter.

Anyone with information on this case can contact Ron Lee at 541-474-7885 or email editor@usobserver.com.