US~Observer Wins When Others Lose 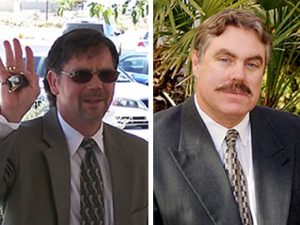 Pahrump, Nevada – On December 18, 2008, two separate, completely false felony charges were filed in Nye County, Nevada against Manuel Mairs and his wife Jacklyne. The charges filed with Nye County District Attorney Robert Beckett upon “information” by Assistant Sheriff Richard Marshall included Felony Perjury and Felony Subordination of Perjury, regarding statements the Mairs had either filed or conspired to file with others alleging that Manuel’s daughter Aliza Mairs “had been sexually abused.”

According to documents obtained by the US~Observer, Mr. Mairs, who is currently an out of state law enforcement officer and who had previously been employed by the Nye County Sheriff’s Office, attempted to file a Child Protective Service (CPS) report of sexual molestation and abuse, perpetrated upon his (5) five year old daughter in early 2006. It should be noted that just days prior to the report being made, Mr. Mairs, obviously concerned, had reportedly made numerous unsuccessful attempts to contact his ex-wife, Charleen Mairs-Toppo, who’s the mother of the child, to inform her of those allegations.

Not hearing back from his ex-wife, Mr. Mairs attempted the only other means he could think of to contact her, he called her husband, Dr Frank Toppo. Although Mairs never spoke to his ex-wife, her husband and step-father to this child, was informed of the allegations against his sons and others. During this phone conversation, Dr. Frank Toppo reportedly adamantly refused to “acknowledge” the information his step daughter and other witnesses were alleging. According to Mairs, just after he informed Dr. Toppo that he intended on filing a report, Toppo boldly stated to him, “I would hope so. In fact, I welcome an investigation and would think less of you as a father if you did not investigate and report it.”

The Mairs subsequently filed their reports with authorities and once the Nye County Sheriff’s Office got involved with the sexual molestation/abuse case, it wasn’t long before the investigation came to a sudden stop, as all communications with the Mairs ceased. Multiple letters to the sheriff and district attorney’s office, as to the status of the case and requests for information were ignored.

It didn’t take long for Dr. Frank Toppo to acquire the services of Pahrump attorney Tom Gibson for the purpose of representing him in a slander and liable lawsuit against the Mairs’ and relatives of Manuel’s ex-wife Charleen for giving the Mairs information regarding the alleged abuse.

In early 2008, Mairs daughter once again reaches out for help. She informs her farther that she is being subjected to additional abuse, threats of future abuse and is also being intimidated by both Dr. Frank Toppo and her mother Charleen Mairs-Toppo, not to discuss the prior acts of sexual molestation/abuse with anyone. After being interviewed and evaluated by multiple Mental Health Providers, Mairs receives an emergency order for Temporary Custody of the child. Dr. Frank Toppo was reportedly implicated by young Aliza during an interview with a professional child therapist of and taking part in the alleged abuse.

On December 16, 2008 the Family Court places restrictions upon Charleen Mairs-Toppo, which required that she not allow Aliza to have any contact with her step-father Dr. Frank Toppo, or his two sons. Aliza’s interviews and the actions taken because of them should be taken very seriously, due in part to the documented admissions of Dr. Frank Toppo. Toppo has admitted that he referred to his children’s private parts as “penis shortis disease” he has stated he, “has a tendency, I’ll be quite candid with you, of all my life of groping myself,” and when asked if he knew about children asking Aliza Mairs to touch their private parts, he replies, “That’s my understanding, yes.” This is the same person who admits to his ex-wife (Charleen Mairs-Toppo) being a totally different person after going off of the prescription drug Zoloft, and that he had to eventually recommend her to a psychologist.

Within two days of the restrictions being ordered against Charleen Mairs-Toppo for Dr. Frank Toppo and his two sons to not have any contact with Aliza, Asst. Sheriff Richard Marshall, on December 18, 2008, files completely false and “conspired” criminal charges against the Mairs, but no criminal charges are filed against those (witnesses) who provided the information of the sexual molestation/abuse.

Additional documents obtained by the US~Observer indicate that Dr. Toppo’s personal civil attorney, Thomas J. Gibson, apparently working as an agent for the District Attorney’s Office, mysteriously produces an “Offer of Immunity” to Marcia Shockley (sister to Charleen), Marcia’s husband Ray and Desiree Tomkiewicz (Charleen’s half-sister) from prosecution of possible criminal charges and removed them from his civil suit in return for them changing their stories. All of a sudden, the very ones who provided the information to the Mairs regarding abuse were stating that Manuel and Jacklyne had prompted them to provide false statements or enhanced their statements regarding the severe abuse.

Obviously, Gibson must have had discussions with DA Beckett over the case, which begs the question – Where in the world does this personal civil attorney get off receiving a confidential criminal case document directly from the District Attorney, which he then presents, along with a demand letter for $65,000 requesting a settlement in the civil defamation case that he is representing Dr. Frank Toppo in, solely and specifically, against the Mairs?

It should also be noted that reportedly, Thomas J. Gibson had previously been employed as a Deputy Prosecutor for Nye County, working directly under Robert Beckett’s supervision. Further reports indicate that Mr. Gibson, an associate of Gibson & Kuehn, LLP in Pahrump, Nevada, is currently under contract for Nye County’s “Public Defender Services” at the tune of $550,000 annually. It would appear that the Public Defender’s Office and the District Attorney’s Office are just a bit too cozy as well.

The obviously “well connected” Dr. Frank Toppo arrogantly claims in legal documents, that he has a very good personal relationship with many deputies of the Nye County Sheriff’s Office, which include high ranking administration members such as the Sheriff, Tony DeMeo, his Asst. Sheriff’s, Richard Marshall and William Weldon and of course “The Big Boss,” as he refers to Nye County’s District Attorney, Robert Beckett. The doctor went on to state in the documents that the relationships were not only personal but professional as well. Dr. Toppo claims that some individuals had been and/or are currently patient’s of his private medical practice, which also operates in Pahrump, Nevada.

Toppo has admitted to his short, few-year relationship with DA Robert Beckett, raising serious questions regarding District Attorney Beckett’s recent guilty plea to misdemeanor “reckless driving” wherein he agreeed to attend alcohol related classes. This incident resulted from a 2008 Driving Under the Influence of Alcoholic Beverages (DUI) arrest where he crashed his county-issued vehicle and then, just hours later, rolled his personally owned vehicle while driving it back towards the original crash scene. Dr. Toppo reportedly was the “doctor” who provided the medical testimony that assisted his “friend” Robert Beckett in avoiding the serious DUI and other related charges. What conclusion would any prudent person reach upon receiving information that Dr. Frank Toppo allegedly assists Beckett with serious criminal charges and then Beckett turns around and attempts to prosecute the Mairs on completely false criminal charges?

Amazing, and this so-called doctor has the gall to file a civil lawsuit against exemplary and concerned parents like Manuel and Jacklyne Mairs. He then further continues his gall by allegedly conspiring false criminal charges through his “friends and patients” against them. I promise Dr. Frank Toppo that he is not even remotely as powerful as he thinks he is and he will soon find this fact out – first hand…

On May 11, 2009, after completing our in-depth investigation and determining that the Mairs were innocent we wrote District Attorney Robert Beckett a letter informing him of our findings and of the fact that he should abandon the false charges. On June 25, 2009, US~Observer investigators appeared at the Mairs “Preliminary Hearing” with attorney Lisa Rasmussen of Las Vegas, Nevada. The hearing, scheduled for 9:00 a.m. didn’t start until 10:00 and it was very short lived. During the one hour delay the assistant DA’s were rushing around the court house stating that their witnesses had not appeared. At approximately 9:40 attorney Lisa Rasmussen called the state’s main witness, Marcia Shockley, via her cell phone, and was informed that the District Attorney’s Office had not contacted her at any time; that she had no knowledge of the hearing. The Assistant DA stated that he had a verbal commitment from Marcia that she would appear. As Judge Tina Brisbell started the hearing she informed the assistant DA, “this is not the time to be gathering up your witnesses.” She then dropped all false criminal charges against the Mairs. Beckett and company obviously conducted a very well scripted plan to get rid of the false charges without appearing to be the culprits they are.

Given the fact that Marcia was only minutes from the court house, this writer must assume that this entire staged performance was orchestrated by none other than Nye County District Attorney Robert Beckett and Frank Toppo’s attorney Tom Gibson for nothing other than a personal monetary gain from the civil defamation suit. Beckett and those involved with him had no intention of continuing their false prosecution once they found out the US~Observer was on this case. This DA’s Office has the habit of filing false criminal charges and they also have the habit of dropping them when confronted with public exposure of their crimes against the innocent. The Observer fortunately had the pleasure of forcing them to drop false felony charges against Bud Sonnentag a few years ago and now the satisfaction of having false charges dismissed against the Mairs.

Attorney Lisa Rasmussen should be highly commended for her work on this case. Lisa had no problem confronting the DA’s Office regarding evidence they intentionally withheld from the defense and she had no problem in open court of exposing the assistant district attorney’s “shell game” as she so eloquently called it.

Even though the Mairs no longer face the possibility of false criminal charges, they have been decimated financially as a direct result of this absolute conspiracy against them by Nye County, Nevada officials and others. We must not forget that the young and vulnerable Aliza Mairs has been greatly damaged as well – possibly beyond repair. There is no question that these officials are the actual criminals and they should be behind bars…period. The Mairs should file a major civil rights lawsuit against Nye County Officials and they should sue the hell out of any individuals who have assisted is this absolute conspiracy on behalf of not only themselves, but for 8 year old Aliza as well.

Editor’s Note: Look for much more on this case in the near future. If any of our readership has any information regarding the Nye County Sheriff’s Office, District Attorney’s Office, or this case and the players involved, they are asked to please contact US~Observer’s Edward Snook at: 541-474-7885.