Since Okanogan Superior Court Judge Christopher Culp dismissed the charges against James in July of 2018 and the State of Washington withdrew its appeal of that dismissal, not one of the above listed newspapers have written a retraction regarding the fake and defamatory news articles they fed to the public.

On July 26, 2019, the US~Observer wrote to each and every one of these fake news sources, pointing out the false and harmful articles they published about James and asking for them to tell their readership the truth about James and Angela Faire. Remarkably, not one of the newspapers possessed the integrity to own up to their damaging articles, nor have they published the truth about the Faires.

As for the TV outlets, KREM2 News responded by updating their site with an article that doesn’t even mention James Faire by name. They had no problem using his name when they pronounced his guilt but now that his case has been dismissed, they keep it from the public.

KOMO News, however, came out with a very good article setting the record straight and helping clear a man’s name who they had played a part in damaging. They even called the US~Observer’s Editor-in-Chief and thanked him for bringing the issue to their attention.

The US~Observer contacted PR Newswire, a subsidiary of Cision, Ltd., to publish a nationwide press release about the Faire case. After an initial courting, we were informed by Sydney Shepherd, an agent of Cision, that they would not take our money and publish the press release as our content regarding vindicating innocent people was not “suitable for distribution” through their network.

We all hear about “fake news” these days but do we really understand just how bought-and-paid-for the mainstream media is? The US~Observer sure does!

Bottom line, the mainstream and its distributors are dangerous to our freedom.

It is critical that honest media and the people who are smart enough to acknowledge the stranglehold that the fake, mainstream media, and the corrupted swamp that they represent, join with the US~Observer. Together we will show them that we don’t need or want their services anymore.

Please take action and send this article and the original press release regarding the Faires to as many people as possible. Also, ask each person you send this to, to do the same.

If each of us will do our part, we can take back the narrative and once again have honest reporting that represents the interests of the people. 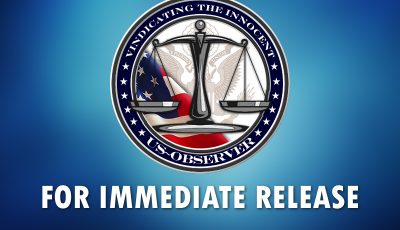