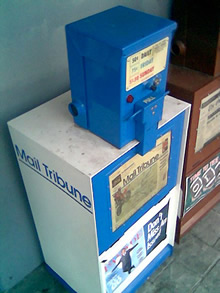 GRANTS PASS, OR – This lawsuit is about intimidation, potential identity theft, personal safety, and Second Amendment Rights. A small town newspaper goes hog wild. The Medford Mail Tribune is published in Jackson County in Southern Oregon and has an agenda of attacking Second Amendment Rights. This is confirmed by Kevin Starrett head of Oregon Firearms Federation. (1) Starrett writes, “The Mail Tribune, which has repeatedly editorialized that licensed, trained adults should NOT be allowed to carry firearms on school property, believes that one of the ways to promote its anti-gun agenda is to intimidate gun owners by demanding that the Sheriff turn over the names of license holders.” The present editor Bob Hunter has declared war and placed concealed handgun license (CHL) permit holders in the cross hairs of his elephant gun. He confidently fired the first shot, a lawsuit at Jackson County Sheriff Mike Winters, also affecting 6,500 CHL holders. Sheriff Winters said, for privacy and safety reasons, “I don’t believe it’s anyone’s business who possesses a concealed handgun license,” (Mail Tribune). Editor Bob Hunter said, “This is information bought and paid for by the public, and the public has a right to it.” (Mail Tribune) Hunter fails to reveal that the CHL applicant pays $50 or more to the sheriff’s office and $15 to the state police for a finger print check. Hunter claims this information is public record; hence he or anyone else should have access to it. Hunter wants to see how many school teachers in Jackson County have a CHL. South Medford High School teacher Shirley Katz recently sued the school board so she could carry a concealed weapon into the classroom for personal protection against intruders or a former husband. Jackson County Judge Philip Arnold recently ruled the Medford School Board could set policy on CHL on the school grounds, thus denying Katz the right to protect herself. Katz intends to appeal the ruling.

What You See is What You Get

Crime is rampant across the United States. Murders, rape, assaults, burglaries, and various kinds of theft including identity theft are always in the news. The daily police reports in local newspapers show thousands more graduating into the criminal status and ready to take up residence in a prison near you. Those already locked in concrete and steel facilities in the US total over 2.2 million as of mid 2007. One in 32 US adults is in the prison system including jail, parole, and probation. Oregon has a state prison population of 13,508 and growing. Almost one-third of released Oregon prison inmates find their way back into prison again within three-years. Those on felony probation total 20,479; this means over 6,000 return to prison within three years. The cost for this recidivism is reportedly about $200,000 per returned inmate. The U.S. has more convicted criminals than any country in the world including China, (with over a billion people) according to available information. Law abiding citizens are at risk of a “Clear and Present Danger.”

The law abiding citizen is not a predator, and he has many enemies besides the criminals on the street that commit crime for profit, pleasure, and thrills. Those who actively work to take away Second Amendment Rights are just as dangerous to law abiding folks as the criminals. Our Bill of Rights gives qualified citizens the legal and moral right to own a weapon to protect family, home, and friends. The so called elite in government and the media are generally arrogant socialist liberals, and they regard the ordinary citizens as incompetent bumpkins. Those espousing this totalitarian philosophy, though always couched in benign terms, are fearful of an armed citizenry. Their intention is to steal the gift of freedom the founding fathers bequeathed this nation. We find gun banners all through government and the private sector. This includes Congress, the court system, the media, and the resident who does not understand the US Constitution. The carrier of this anti-gun plague is the media. Small town or big towns, the newspapers generally beat their drums to the same rhythm of “ ban the gun.” To say this bluntly, these people are enemies of the US Constitution, the principles the founding fathers set down to guide this republic across the vast sea of time, and a defined hazard to the health and welfare of all law abiding citizens who claim Second Amendment Rights.

Who’s going to Protect You, the Mail Tribune?

The police aren’t there to protect you as an individual. They investigate crime after the criminal act has taken place. Police are mostly reactive, not proactive. If this is leaving the reader feeling vulnerable like a game animal during hunting season, that’s the intent. In our society the criminal with evil intent is the predator, and you the honest citizen become his prey.

According to the statistics cited above, your chances of meeting a predator are higher than they should be. Remember the state does not care about your personal safety. For example, when an Oregon sheriff’s department runs short of money the sheriff pulls the plug on public patrols and emergency calls. The state has mandated by law that the sheriff’s office protect the courtrooms, serve warrants, and run the county jail. There is no law saying the sheriff is required to protect the public. You can’t sue the police department because you were assaulted, raped, or robbed. Every man and woman without a felony conviction and mentally sound should have a CHL permit and the training to protect their family and friends from the large number of criminals in our society. Criminals know there are no guns at South Medford High School. The Medford School Board has willingly decreased the personal safety of Shirley Katz, other teachers, and students. At the same time the school board has not increased security at the school to counter its act. The fact is individuals trained in the use of a weapon and having a CHL are the cream of the crop in our society. They have no felony convictions, they are mentally sound, they don’t use illegal drugs, and they could save lives during an emergency situation at a school. The ones the school board should be concerned about are those who have guns and no CHL on school grounds.

It’s Time to Push Back

Meanwhile Bob Hunter continues his lawsuit to get access to private information on 6,500 CHL permit holders. Does he to expect these permit holders to wring their hands exclaiming, “ Oh dear, what shall we do? Big Bad Bob is suing the sheriff.” Well, Big Bad Bob and his Publisher James Grady Singletary may have a case of acid reflux when they read this.

The Mail Tribune, like all newspapers, is profit motivated and has payrolls to meet. If they can’t pay, they can’t play, and the presses roll to a halt. No money to fund a law suit to sue the sheriff and carry out their antigun agenda. The money they get comes from advertisers, and there are lots of them during the holiday season. For example, recently Crater Lake Ford had a full page colored ad, Lithia Toyota had a full page colored ad, Sherm’s Thunderbird Market had a full page colored ad, Peterson Cat had a full page ad, each of which cost over $1,000. The Mail Tribune has lots of ads, and each dollar paid helps support a newspaper that is antagonistic to gun rights. Now if a few of the 6,500 CHLs feel threatened that Bob Hunter could have access to their personal information, they could quite easily make Hunter the Hunted. A letter could be sent to Hunter’s advertisers explaining they felt the advertiser was funding and enabling the Mail Tribune to carry out an antigun agenda and intimidation of CHL holders and future applicants. The advertiser should certainly be encouraged to stop funding the paper until Hunter dropped the lawsuit against Sheriff Winters affecting 6,500 CHL holders. If the businesses disagreed, they could be picketed. Drastic measures are required in an issue this important. No business wants picketers outside its doors, especially thousands of CHL holders in Jackson County during the holiday season or for that matter any time. It’s a good bet gun owners around the state would be glad to make a trip to Jackson County and help with the picketing if they were invited. However, it’s highly probable that the letter would take a toll on the ad dollars used to fund the Mail Tribune lawsuit against Sheriff Winters, and picketing would not be necessary. This same tactic can be used against any newspaper in the country which needs to become attuned to Second Amendment Rights.

Put Them on the Run

If the CHLs and all gun owners in Jackson County, Oregon, can’t take on Editor Bob Hunter and Publisher James Grady Singletary and put them on the run, they may as well turn in their guns and forget Second Amendment Rights so we can be like England, Australia, and Canada. It’s time Editor Bob Hunter became Bob the Hunted.

John Taft can be contacted at joconewsline@hotmail.com.

Time for a Charter Change?